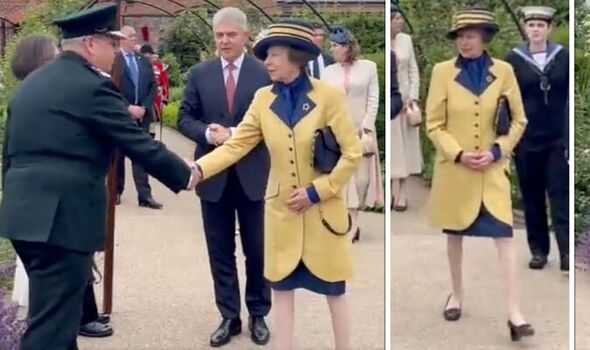 The Princess was earlier spotted arriving in a Royal helicopter.

She made an appearance at at a garden party at Hillsborough Castle and Gardens this afternoon, and could be seen greeting guests with Northern Ireland Secretary of State Brandon Lewis.

It is the first annual garden party held at the castle since the beginning of the Covid pandemic.

The party was held to honour community workers.

Anne also visited Ballymena in Co Antrim, and an equine rehabilitation centre as part of her one-day trip to Northern Ireland.

The visit began with a trip to Ballymena Showgrounds.

A flagship celebration is being held there to mark 100 years of cadets from across Northern Ireland in St John’s Ambulance.

Anne met with leaders, as well as cadets and badgers, learning more about the organisation’s range of youth programmes and activities.

“Since 1922, the Cadets has enabled young people to learn vital first aid skills, as well as building confidence.” 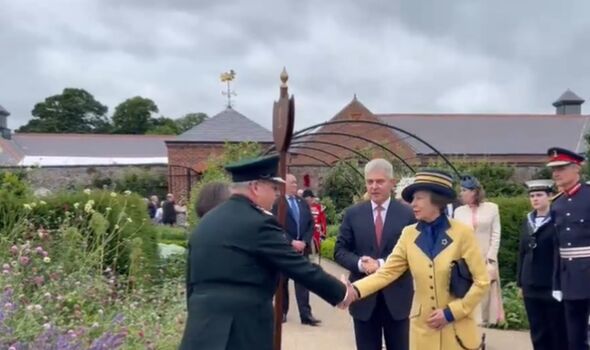 Here she viewed the stable area, and saw a demonstration of a water treadmill and saltwater hydrotherapy used in the rehabilitation of horses.

The party at Hillsborough Castle represents her last of the day, where she appeared as a maid of honour.

Mr Lewis presented Anne with a Platinum Jubilee hamper, a gift produced as part of a Northern Ireland Office initiative.

Before leaving, Anne planted an oak tree in the castle’s walled garden.

The Princess Royal has recently signalled she has no intention of slowing down as she approaches her 72nd birthday.

She has agreed to become the patron of an association previously supported by her father, the late Duke of Edinburgh. 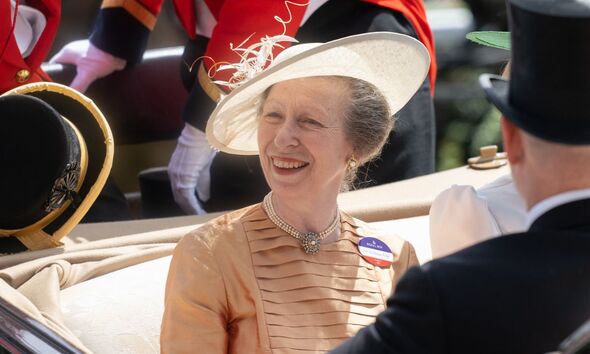 The organisation, BAPRAS (British Association of Plastic Reconstructive and Aesthetic Surgeons) aims to raise awareness of the breadth of plastic surgery as well as promote innovation in the field and understanding of the profession.

Upon sharing the news, the association said in a statement: “BAPRAS is delighted to announce that Her Royal Highness, The Princess Royal has agreed to become its Royal Patron.

“HRH Princess Anne is regarded as one of the hardest-working members of the Royal Family and with her support for the military services we felt she would have a connection with the work and origins of our Association.”

The statement added a touching tribute to Prince Philip, who died in April last year.

It read: “For the last 57 years, until his sad passing in 2021, we have benefited from the patronage of the His Royal Highness the Duke of Edinburgh who has been an inspirational figure and vocal supporter of the Association.”

Over the course of his life, the late Duke became associated with more than 990 charities and associations.

Some of these patronages were passed on to other members of the Firm, such as the British Trust for Ornithology, which is now spearheaded by the Duke of Cambridge.

However, many others lost their links to the Royal Family after the passing of the Queen’s husband.