Princess Beatrice has said she is “so delighted” after giving birth to a girl on Saturday.

In a message on Twitter, Beatrice said her daughter was born safely – but did not mention whether a name had been chosen.

She added: “Thank you to the midwife team and everyone at the hospital for their wonderful care.”

Her message came a few minutes after Buckingham Palace made the announcement, saying: “The new baby’s grandparents and great-grandparents have all been informed and are delighted with the news.

“The family would like to thank all the staff at the hospital for their wonderful care.

“Her Royal Highness and her child are both doing well, and the couple are looking forward to introducing their daughter to her big brother Christopher Woolf.”

The princess and property tycoon Edoardo Mapelli Mozzi married in 2020 in a secret lockdown wedding after their planned ceremony was postponed because of the pandemic.

Beatrice is also stepmother to her husband’s son, Wolfie, from a previous relationship.

The Prince of Wales and the Duchess of Cornwall’s Twitter account welcomed the birth of Beatrice’s daughter.

The tweet said: “Congratulations to Princess Beatrice and Edoardo Mapelli Mozzi on the happy news of the birth of their daughter.” 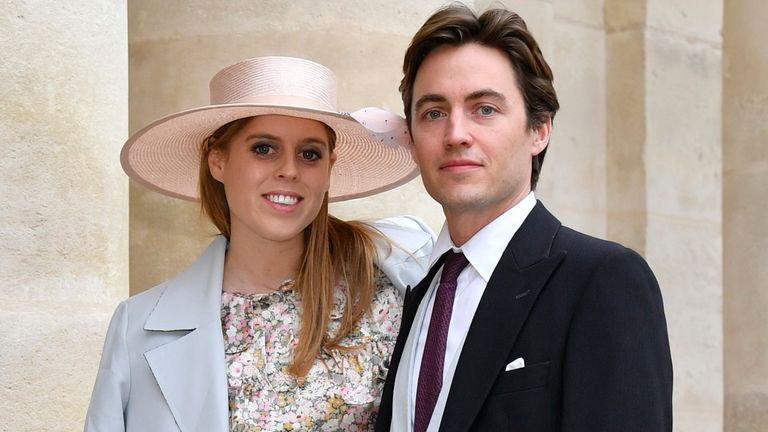 The baby, who is 11th in line to the throne, is the Queen’s 12th great-grandchild, and the second to be born since the Duke of Edinburgh’s death, following the arrival of the Sussexes’ daughter Lilibet in June.

The first 10 places remain the same, with the new addition entering the line of succession below Beatrice and above Eugenie, who has moved to 12th.

The Cambridge’s children call their great-grandmother the Queen Gan-Gan, and the monarch always leaves a small gift in her great-grandchildren’s rooms whenever they come to stay.

Beatrice is the eldest daughter of the Duke of York and his ex-wife Sarah, Duchess of York, with the baby being their second grandchild.

Beatrice, who is not a full-time working royal, is vice president of partnerships and strategy at Afiniti, an artificial intelligence software firm.

She has a number of royal patronages including the Forget Me Not Children’s Hospice, the Teenage Cancer Trust and the Helen Arkell Dyslexia Centre.

In August, she spoke of how her own dyslexia was a “gift” because it has offered her different skills in life and that her own child or her “bonus son” Wolfie would be lucky if diagnosed with it.

Royal revelation: How Prince Harry always wanted to ‘go off’ and get away from royal life