Home » Europe » Princess Diana tribute: How Kate and Meghan made subtle nod to mother-in-law with choice

Princess Diana inspired millions throughout her life – whether it was down to her charitable work, dedication to her sons or her fashion sense – she has had a lasting influence on popular culture. So perhaps unsurprisingly, her two daughters-in-law have taken a leaf out of her book.

Given to her by her then husband Prince Charles, Diana wore a bracelet charm bracelet following their wedding.

Every year Charles would buy his wife a new charm, and each had a special meaning.

Among the charms was a miniature of St Paul’s Cathedral, where the couple were married in 1981, and a pair of ballet shoes to represent her love of ballet.

There was also an apple to symbolise Diana’s fondness for New York, a teddy bear, and a polo cap to embody Charles’s love of the sport. 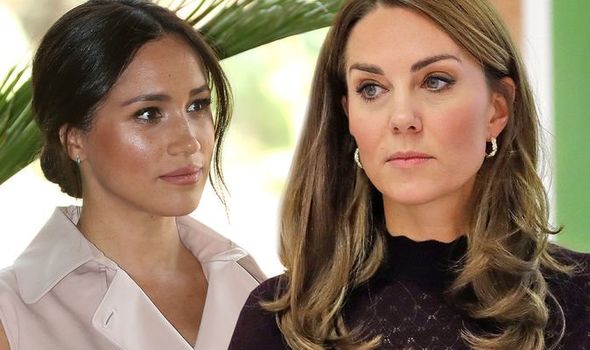 Following the birth of her sons William and Harry in 1982 and 1984 respectively, she added W and the H to the mix.

Despite having never met the late Princess of Wales, Kate and Meghan have both taken inspiration from her, by wearing their own versions of Diana’s sentimental jewellery.

Kate wears a gold disc necklace emblazoned with the initials of her three children – Princes George and Louis and Princess Charlotte.

The personalised Gold Midnight Moon design – which was also engraved with three small stars – is from British brand Daniela Draper. 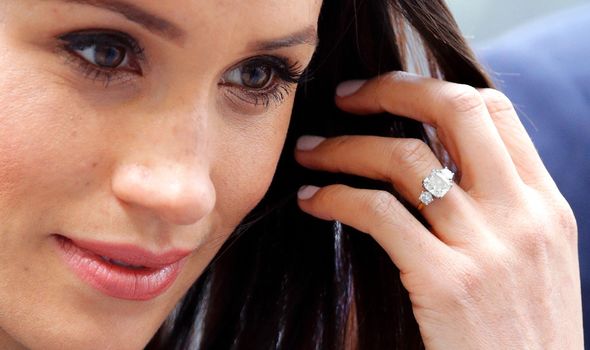 Meghan has been spotted donning a necklace with ‘A’ on it, for her only child.

She also has a necklace branded with H & M, which she was first spotted wearing in December 2016.

The theme is actually quite common in the Royal Family.

Sophie, Countess of Wessex has a similar personalised piece, which features an ‘E’ for her husband, an ‘L’ for her daughter Lady Louise Windsor and a ‘J’ for her son, James, Viscount Severn.

The royal jewellery collection is vast, and pieces are regularly passed down and borrowed frequently.

The Duchess of Cambridge often wears her sapphire and diamond engagement ring that once belonged to Princess Diana.

It has a central blue Ceylon sapphire which is surrounded by a group of 14 diamonds. 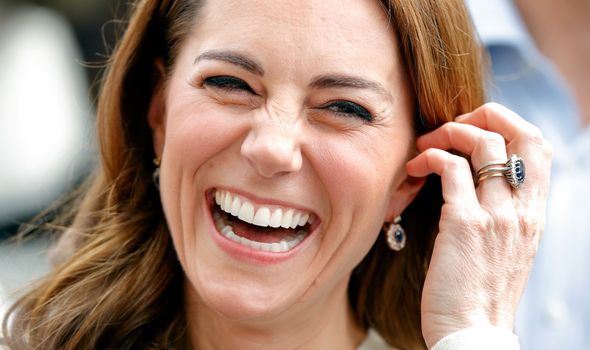 Now this sapphire piece is one of the most famous gem associated with the Royal Family.

All of the jewellery in Diana’s private collection, including this ring, was left to Prince William and Prince Harry, 35.

Each Prince famously chose a piece to remember their mother by when she passed to keep and Harry chose this engagement ring.

On William’s engagement to Kate, Harry offered him the ring to use, in a sweet gesture.

Meghan has worn a number of gems belonging to Princess Diana. This includes a huge aquamarine and diamond ring the she wore for her wedding reception.

This is an interesting choice as it was the ring Diana bought to replace her original engagement ring after the collapse of her marriage to Prince Charles.

The gem was made from Princess Diana’s diamonds and a huge new diamond gem from Botswana.

According to research carried out jewellery manufacturer Buckley London, 20 percent of the public like Meghan’s ring best.

Kate’s historic engagement ring, which was once given to Princess Diana by Prince Charles, came fifth in the vote with 10 percent.

The last royal ring in the top 10 was Princess Eugenie’s pink sapphire ringed by diamonds from now-husband Jack Brooksbank.