Princess Eugenie came to one crowd member’s rescue after a set of keys were dropped over a railing by a child in front of Balmoral Castle. Mourners had gathered outside the Queen’s Scottish residence to pay tribute to the late monarch when the Princess noted the clattering sound of keys falling over the public barrier. Princess Eugenie promptly collected the keys and returned them to the grateful member of the public, noticing the crowd of well-wishers had also brought floral tributes to lay outside Balmoral.

The Royal humbly accepted two red roses from the crowd, offering to lay the flowers on behalf of the well-wishers.

A video of the sweet exchange has been shared on the social media platform Tiktok, quickly going viral after amassing over six million views from users.

Princess Eugenie was flanked by her sister Princess Beatrice as the pair steadily streamed along the barrier, greeting the public crowd.

Princess Anne, Prince Andrew, Prince Edward, and Sophie, Countess of Wessex, were among members of the Royal Family also present outside Balmoral Castle, having returned from a service as Crathie Kirk, a nearby church frequented by the Queen during her stays in Scotland. 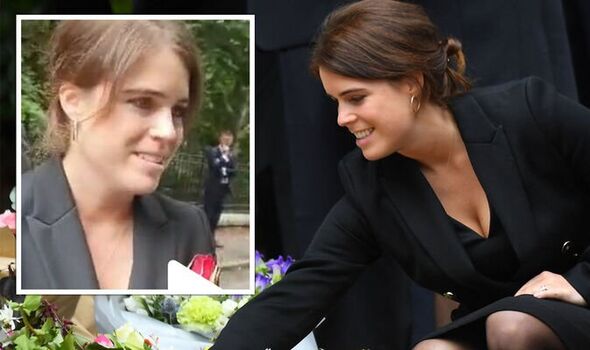 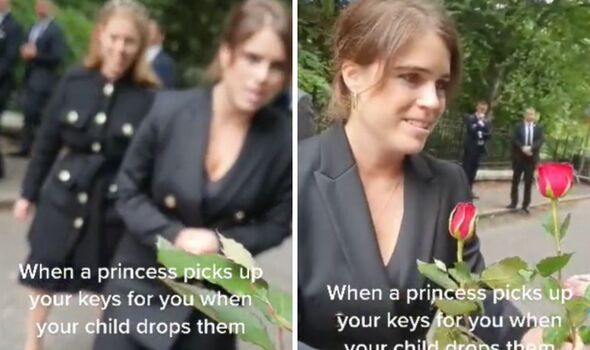 Both Princess Eugenie and Princess Beatrice appeared visibly emotional as they took in the flood of public tributes outside the gates of Balmoral.

The sisters traversed the stacks of flowers, letters, and Paddington Bear toys together, at points hand in hand as they reflected on the sombre occasion.

Prince Andrew was pictured consoling Princess Eugenie with a gentle hug as the Princess wiped tears from her eyes.

Another of the Queen’s granddaughters, Zara Tindall, appeared overcome with grief as she bowed her head in front of the blooms and wiped tears from her face. 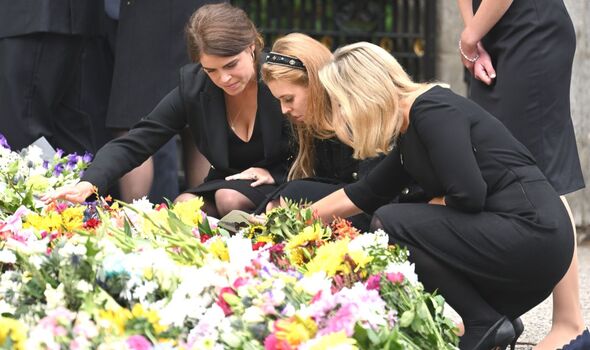 Elsewhere, other members of the Royal Family made a public appearance in Windsor to greet crowds gathered to pay their respects.

It is understood to be the first time the group have made a public appearance together in over two years.

The Royal Family spoke with well-wishers over the barriers, accepting scores of bouquets as well as handshakes and the occasion hug. 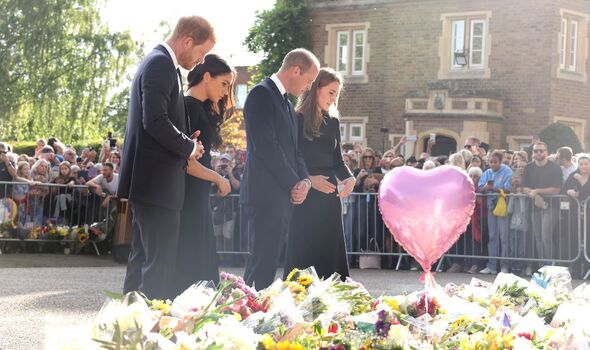 The Queen will be transported to London on Wednesday where her body will then lie in state in Westminster Hall from Thursday.

Mourners will have the opportunity to file past her coffin to pay their respects for a four-day period ahead of her state funeral.

Hundreds of thousands of people are expected to descend on London as the nation grieves their monarch of 70 years.

The official ten-day grieving period will come to an end on Monday evening, following the Queen’s state funeral service which is expected to prompt huge crowds across the capital.

Read next:
William motion to Meghan spotted in ‘very poignant’ moment
Oprah speaks out on Harry and Meghan after Queen’s death
Prince Harry ‘insisting’ on November release for bombshell memoir
We owe it to our Queen to cherish our union – EXPRESS COMMENT
Sussexes ‘think they’re in the right’ as Harry to push ahead with book

Rough sex defence set to be outlawed in UK