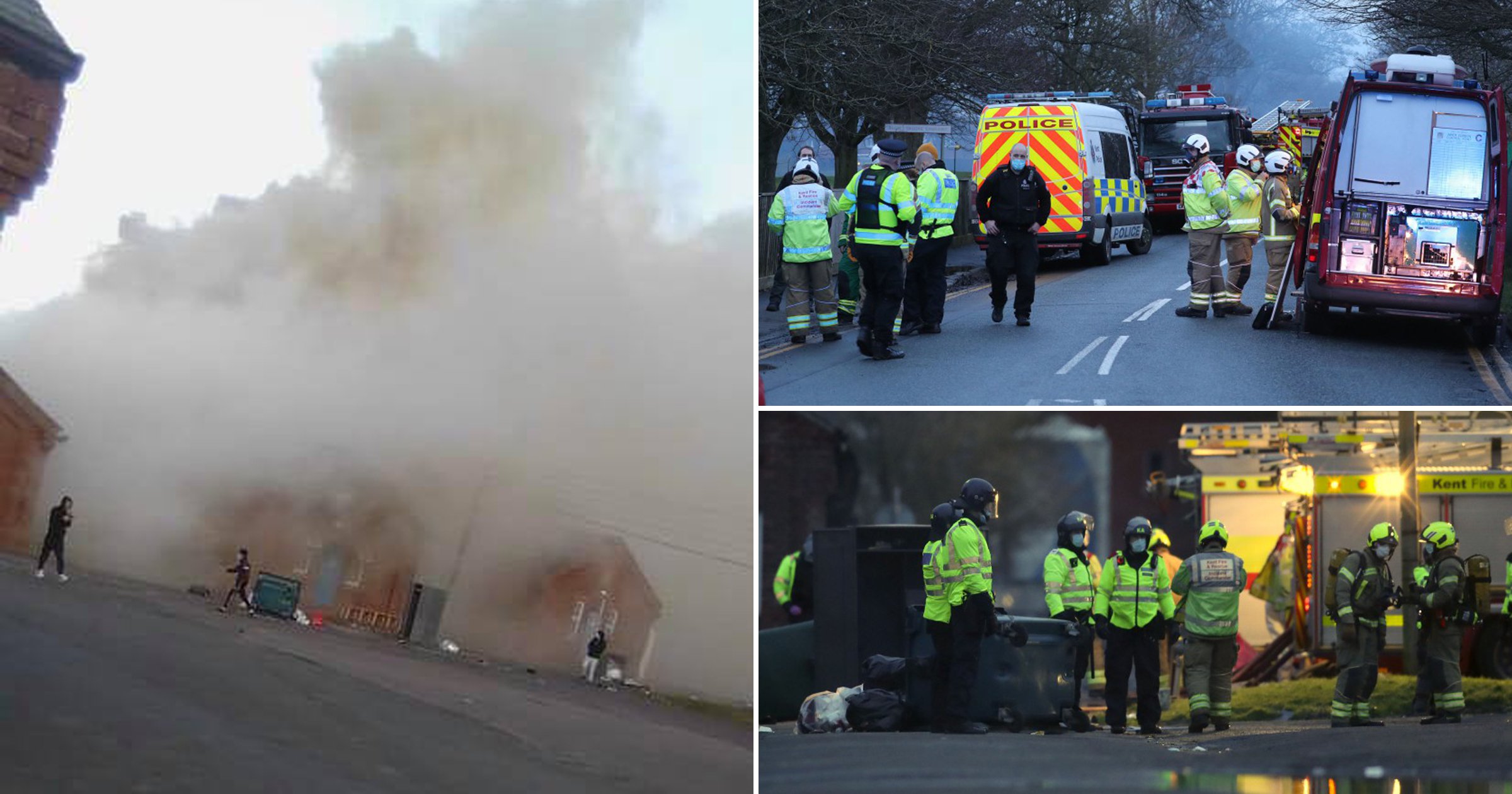 Home Secretary Priti Patel has clashed with refugee charities after a suspected arson at a virus-hit military barracks where hundreds of asylum seekers have been living.

Heavy smoke and flames were seen pouring from Napier Barracks in Folkestone, Kent on Friday afternoon.

The site has been dogged by accusations of poor conditions and recently at least 120 residents reportedly tested positive for Covid-19.

Ms Patel said the ‘damage and destruction’ at the military site was ‘deeply offensive to the taxpayers of this country’ and vowed to support police.

However, charities accused her of playing politics and making ‘sweeping accusations’.

The blaze came on the same day residents were reportedly told that no more people would be moved from the controversial army site.

Police said they believe the fire was started deliberately but that it would be ‘inaccurate’ to refer to the incident as a riot and it was not being treated as such.

The Home Office alleged that windows had been smashed at the barracks and a building had been set on fire.

Ms Patel issued a statement on Friday evening, saying: ‘The damage and destruction at Napier Barracks is not only appalling but deeply offensive to the taxpayers of this country who are providing this accommodation while asylum claims are being processed.

‘This type of action will not be tolerated and the Home Office will support the police to take robust action against those vandalising property, threatening staff and putting lives at risk.’

In response, Kolbassia Haoussou, from Freedom From Torture, said: ‘By mocking the vulnerability of asylum seekers, the Home Secretary would rather shirk responsibility and play politics with people’s lives.

‘Many of the people trapped here suffer from severe mental health issues and low immune systems linked to the abuse they have fled.

‘The camps are unsafe, unsanitary and unfit to house vulnerable people.’

Bella Sankey, director of Detention Action, echoed the criticism of the Home Secretary.

She said: ‘Priti Patel is playing with fire to make sweeping accusations against tens of people who have fled torture and sexual abuse and been warehoused by her in a Covid hotbed.

‘Why can’t she allow emergency services to do their job without political interference? Her divisive, inflammatory and knee-jerk response will only fan the flames of prejudice and undermine the rule of law.’

Eight fire engines were sent to the blaze at the Ministry of Defence-owned facility, which was brought under control by around 6pm.

Police say no arrests have been made and there have been no reported injuries.

Ms Patel has previously insisted the accommodation was of a ‘very strong’ standard and ‘in line with PHE guidance’ – but those living there dispute this.

‘Everyone is panicked,’ said one Napier Barracks resident who fears something similar may happen again in future.

The asylum seeker said he came from a country where he was being persecuted by the government.

Asked about what living at Napier Barracks has been like, the man added: ‘I have suffered here more than I have ever suffered on earth.’

He said that the ‘only dream’ for many of them was to ‘get out of Napier’.

Detective Chief Superintendent Andrew Pritchard said: ‘We are carrying out enquiries and working with partners including the Home Office and Kent Fire and Rescue Service to establish the circumstances surrounding this serious incident and the identities of those who may have been involved.

‘Whilst the exact nature of the disturbance and any potential links to the fire are still being investigated, it would be inaccurate to refer to the disturbance as a riot and it is not being treated as such.

‘There have been no arrests but enquiries are ongoing.’

Fears Crusader's head will crumble when it dries out