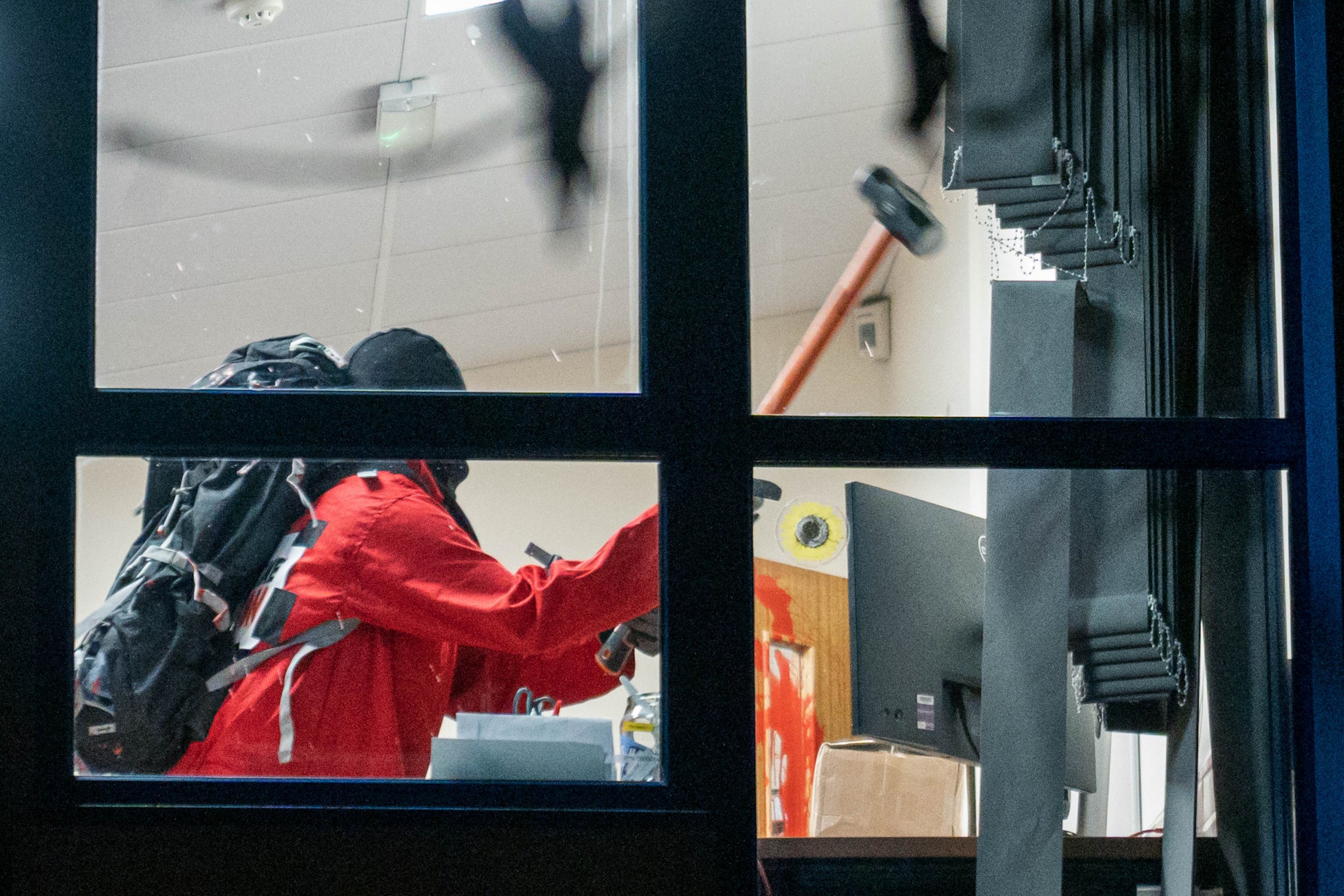 Pro-Palestine protesters wielding sledgehammers smashed their way into a weapons plant in Wales that they say is tied to Israel.

Demonstrators ripped through the plant’s offices, smashing computers, splashing the building in red paint and taking to the roof to bring production to a standstill.

The group claimed that the American firm and its English subsidiary, defence and medical electricals maker Teledyne e2V, supply military hardware to Israel.

Palestine Action seized Teledyne Labtech at around 7:30am, with Dyfed Powys Police quickly blocking roads in and out of the site in Broadaxe Business Park.

Two protesters, aged 34 and 39, rushed the roof before being talked down by police by the early afternoon.

Four people, including a 69-year-old woman, were arrested.

In a tweet, Dyfed-Powys Police said: ‘We were called to reports of a burglary at a property in Broadaxe Business Park, Presteigne, at around 6.35am.

‘Officers attended and promptly arrested two women, aged 65 and 41, on suspicion of burglary, when it was established they were part of a protest group. Two of the group had made their way to the roof of the property.

‘Following communication with officers, they came down at around 10.45am and the 34-year-old man and 39-year-old woman were arrested on suspicion of burglary.

‘All remain in police custody. Enquiries are ongoing.’

Teledyne Labtech, according to the company’s website, makes ‘complex RF/Microwave printed circuit boards’. These boards are often used in smartphones and military radars.

Palestine Action describes itself as a network of groups and individuals aiming to shut down properties owned by Israeli arms manufacturer Elbit Systems.

Teledyne, the group says, is another ‘major player’ in the ‘brutalisation and murder of Palestinians’.

In a statement to Metro.co.uk, Palestine Action said: ‘Protests, petitions and lobbying the British government to end its complicity have failed to create meaningful change, proving that appealing to the oppressors is pointless.

‘Weapons continue to be built in our backyards, which are often “battle-tested” on the captive population of Gaza and used to further surveil and attack the indigenous population of Palestine.’

Protests swept the stage at the event in London’s Landmark Hotel, attended by government and army officials as well as weapons industry representatives.

Elbit Systems UK, the British subsidiary of Elbit Systems, is a member of the trade association techUK.

‘Most famous woman in the world!’ Queen still making headlines despite rest order