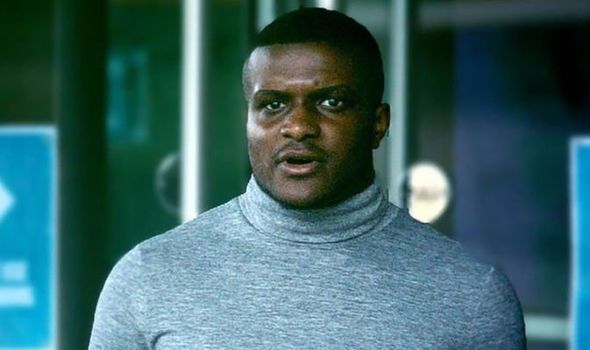 The hearing at Lowry Nightingale Court in Greater Manchester had to be paused while court staff carried him from the room. He cried out “I never did this, I don’t understand, it doesn’t make any sense”, whilst a member of his family clutched his head in his hands and cried.

But the four-week trial had heard Musangu, who was at Rochdale from 2014 to 2017, frequently preyed on young girls.

His youngest victim, who cannot be named for legal reasons, told the court she was raped three times by the goalkeeper.

And Manchester Evening News reports another victim said Musangu led her into a toilet when they were “making up a dance” — where he told her to put her hands on the toilet and lower her clothing, to make her a good dancer.

That incident came after Musangu had led another girl, aged 10 or 11 — into the same bathroom and asked her to do the same, and put his hands on her waist.

Musangu’s other four child victims were aged between 12 and 16.

One girl went to a flat in Rochdale.

When Musangu arrived at the flat, he asked for a one night stand — which the victim refused, as she did when he asked the girl for oral sex.

After the second refusal, Musangu exposed himself, grabbed the girl’s head, and forced her to perform oral sex.

The court was also told that Musangu attacked a young girl on the day of her prom.

When getting changed, Musangu asked her to massage his leg — before saying he had something to tell her in a bedroom.

When the pair got up to the top floor, Musangu ordered the girl to take off her clothes.

When she refused, he pinned her down to the bed, covered her mouth, removed her clothes, and raped her.

He then took photos of the victim and threatened to share them if she told anyone about the attack.

Musangu also engaged in sexual contact with a minor over social media, the jury heard.

Over a three-year period, Musangu sent and received explicit sexual videos with a teenage girl.

The pair attempted to have sex while she was underage. Their contact started when she was just 13-years-old.

Musangu’s only adult victim told the court that he came round to her accommodation after a disagreement between the pair.

Musangu, who now plays for non-league side Mossley AFC, will be sentenced at Manchester Minshull Street Crown Court today.

Judge John Potter told the defendant: “I want to make it very clear to you that I haven’t made any decisions yet as to the sentence you will receive.”

Musangu, from Oldham, Greater Manchester, earlier admitted a further charge of inciting a child to engage in sexual activity.

He was also found guilty of rape of a child under 13 by a 10-2 majority, whilst the four men and eight women also found him not guilty of a count of rape.