Boris Johnson and vaccines minister Nadhim Zahawi were among the politicians to condemn the men captured grabbing Professor Whitty as he walked through London.

They described them as “thugs” and called for police to investigate.

Lewis Hughes, 24, of Romford, Essex, has come forward to say sorry to the government adviser, telling The Sun: “I absolutely apologise for any upset I caused.

“If I made him feel uncomfortable, which it does look like I did, then I am sorry to him for that.”

Insisting there was “no malicious intent” behind his actions, which have seen him lose his job, he claimed he was trying to get a selfie with the medic to show to his mother.

His friend Jonathan Chew, who also appears in the clip, spoke to the newspaper, saying: “We just wanted a selfie”.

The Metropolitan Police say they are still investigating the incident, which happened just after 7pm in St James’s Park on 27 June. 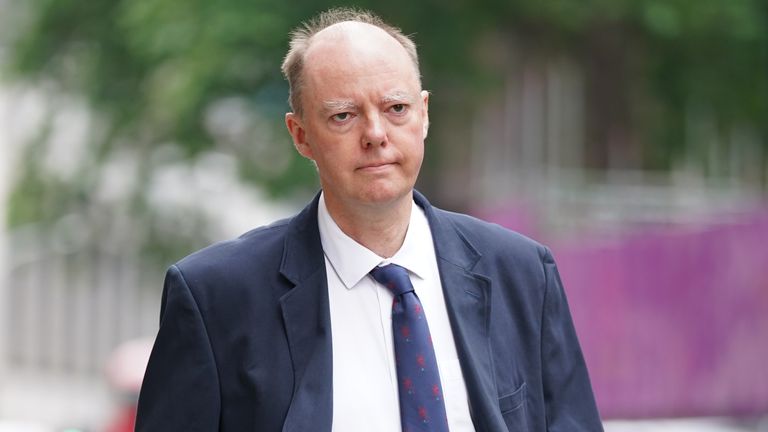 In the clip, which was widely shared on social media, the two men grab hold of Professor Whitty and shout “oi oi…one photo please?”

The medic manages to walk a few steps away, but the men hold onto him again as he crosses a road.

Eventually he struggles free with a passer-by heard saying “leave the gentleman alone” before the clip ends.

“I condemn the behaviour of these thugs. Our hard-working public servants should not have to face this kind of intimidation on our streets and we will not tolerate it.”

Professor Whitty – a physician and epidemiologist – has been at the forefront of the UK’s response to the coronavirus pandemic.

It is the second time he has been harassed on camera during the COVID crisis.

Last summer he was filmed queuing for food in London when a man repeatedly shouted “liar” at him.

Professor Whitty later said he “didn’t think anything of it”, telling a Downing Street news briefing the “odd lad” was “showing off”.