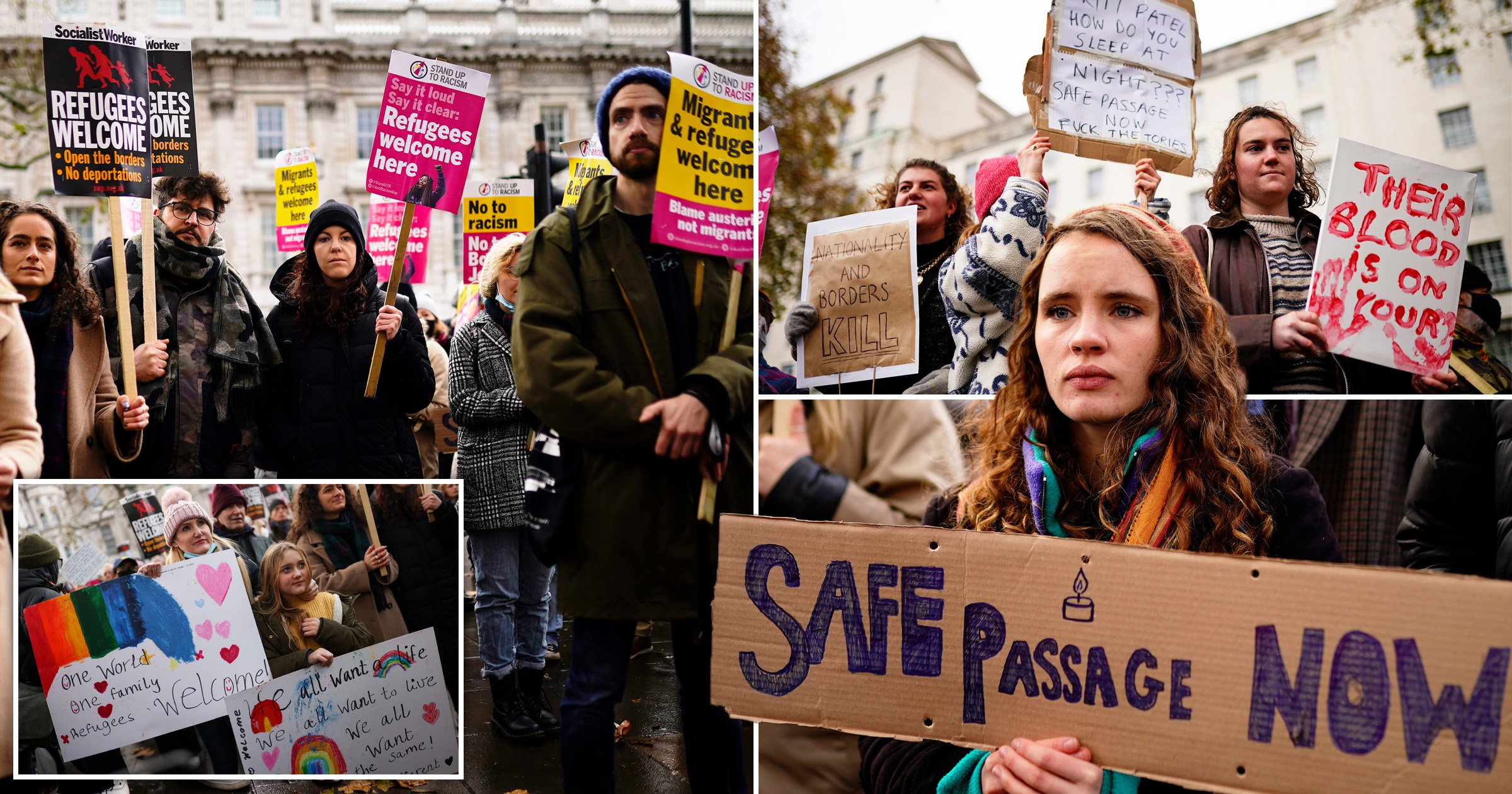 Dozens of demonstrators have assembled outside Downing Street to protest over the deaths of 27 people who perished while trying to cross the English Channel.

Seven women including a mum-to-be and three children were among the victims who drowned while attempting to reach the UK from Calais in an inflatable dinghy which capsized on Wednesday.

The ‘catastrophe’, believed to be the deadliest Channel crossing on record, claimed the life of Maryam Nuri Mohamed Amin, 24, a Kurdish woman from Iraq who was ‘glowing with hope’ to start a new life in Britain with her future husband.

Around 150 people gathered near his London home on Saturday afternoon for a protest organised by Stand Up To Racism and Care4Calais, amid fears people ‘people will continue to drown’ in Channel unless ministers take action.

Another warned politicians ‘their blood is on your hands’ while one held the warning: ‘Nationality and borders kill’.

A young girl at the protest held a poster saying: ‘We all want a life, we all want to live’.

The protestors demanded ministers scrap the Nationalities and Borders bill and called for the rapid expansion of safe and legal routes for refugees to enter Britain.

The legislation, a bid by the government to ‘fix the broken asylum system’, will include fresh powers to remove people found to have no right to be in the country.

But critics fear it will criminalise people fleeing persecution and poverty in their homelands.

Lara Bishop, a volunteer for Care4Calais – a charity which supports asylum seekers who arrive in the UK, urged politicians to ‘remember humanity’.

Ms Bishop said: ‘No-one should have to die on our border. We are a first-world nation.

‘We are the sixth biggest economy in the world but we only take 1% of refugees and we make it so difficult for people to cross and it’s not OK for people to be dying in the Channel.

‘I think the British and the French governments need to remember humanity. At the moment they’re using them as political pawns – throwing them between themselves – but these are humans.

‘These are people’s mothers, brothers, sisters, and I think they’ve lost all perspective on that, these are just numbers in a political game and I think they need to remember these are humans we’re talking about.’

It comes as politicians lock horns over the issue, with Mr Johnson and French President Emmanuel Macron becoming embroiled in a furious war of words over how to halt the treacherous Channel crossings.

France snubbed Home Secretary Priti Patel from a summit on Calais tomorrow after the PM wrote a letter to Mr Macron urging him to take back people who crossed the channel.

The letter, published on Twitter, was branded ‘unacceptable’ by French interior minister, Gerald Darmanin, who said: ‘As a result Priti Patel is no longer invited.’

More than 25,000 people have made the perilous journey across the Channel in small boats this year – triple the number in 2020.