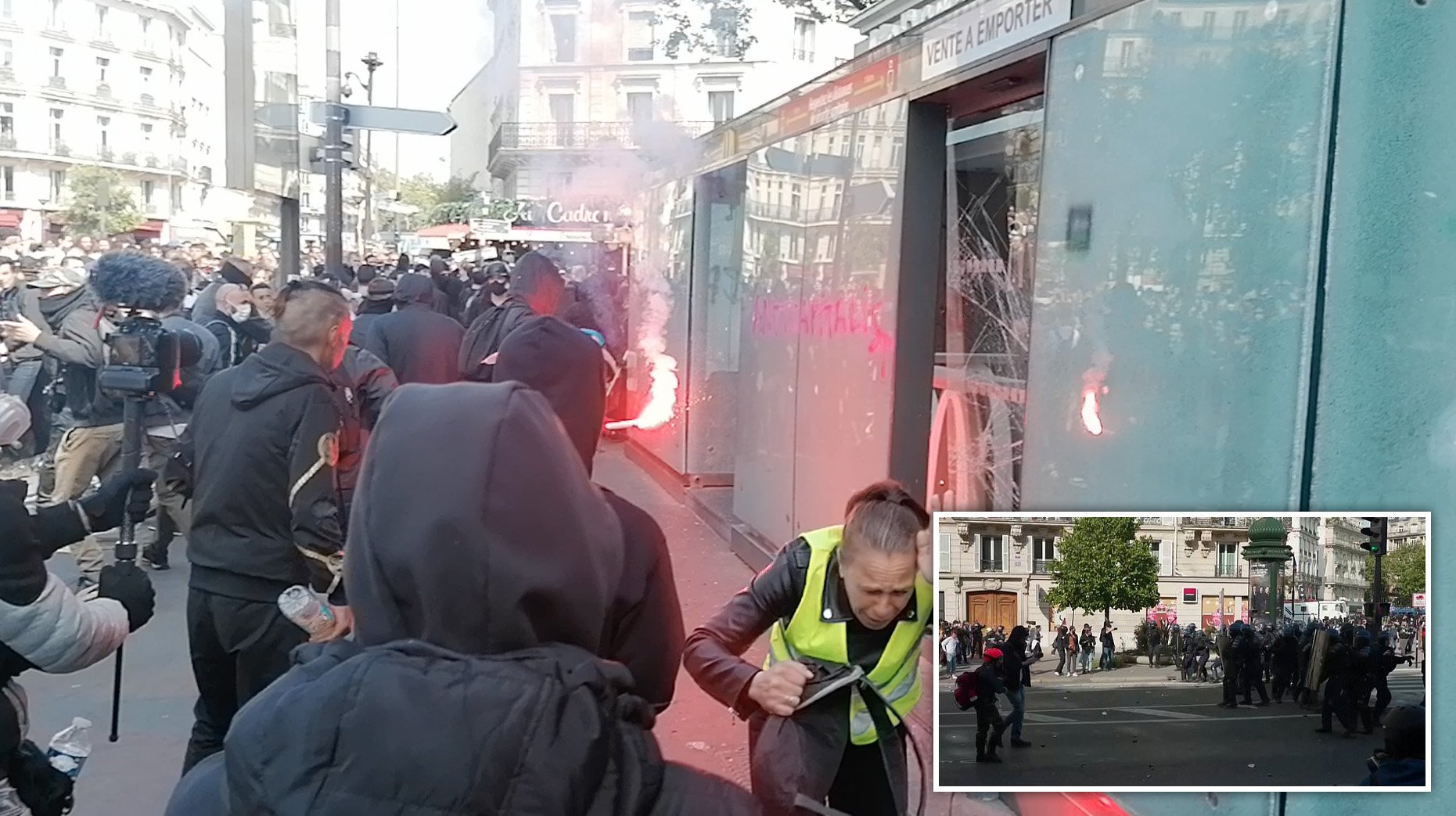 Anti-capitalist protesters wrecked a branch of McDonald’s as well as banks and estate agent shops while out to mark May Day yesterday.

Thousands joined protests across France, angry at the policies of the newly elected president Emmanuel Macron, including his aim to raise the retirement age from 62 to 65, arguing that this is the only way to protect pensions for workers.

Video showed how the fast food restaurant as well as estate agents were ransacked, with shattered windows and chairs pushed over on the ground.

Next to one of the shops, graffiti read ‘anticapitalisme’.

Another video shows how a firefighter was attacked in the street while trying to put out a blaze.

Around 5,000 police officers were on duty in Paris alone yesterday, and some moved in on protesters, firing rounds of tear gas.

He said that eight police officers had been injured, calling the perpetrators of the violence ‘thugs’ who were trying ‘to stop the right to demonstrate’.

Philippe Martinez, general secretary of the General Confederation of Labour – France’s largest trade union – said before the protests: ‘The May Day mobilisation must be as massive as possible.

‘Beyond the unions, citizens must take to the streets so as to make sure their social and environmental demands are made loud and clear.’

Marches and meetings were being held across France, including in major cities beyond Paris, such as Marseille, Nantes and Toulouse.

Thousands turned out for the protests in Paris, with peaceful marches held to support the power of unions as well as the episodes of violence that erupted.

It comes as week after Macron emerged victorious in the election, becoming the first French president in 20 years to win a second term in office – with protests also breaking out in response.

In the final round, voters were given a choice between centrist Macron and the far-right Marine Le Pen, with many feeling their values were not represented on the ballot after leftist candidate Jean-Luc Melenchon was knocked out of the running.

Mr Melenchon, who came third in the presidential election, was one of those leading the May Day march in Paris yesterday.

He called for all Left Wing parties to ‘unite, and to regain the will to win’, in time for legislative elections in June.

His aim is to deprive Mr Macron of a working majority in the National Assembly, so making it harder for him to govern.

Responding to the violence yesterday, Mr Melenchon said: ‘The parasitic violence of May 1 makes the march of the unions invisible and serves as propaganda for our worst enemies.’

He added: ‘May Day is the time to rally for a reduction in working time. That reduction signifies one key thing – that workers should be getting a larger share of the wealth.’

Royal REVELATION: How the Queen mother restored monarchy after ’BETRAYAL’: ‘She felt FURY’

Royal Family surname before Windsor – Why did the Royal House change its name?