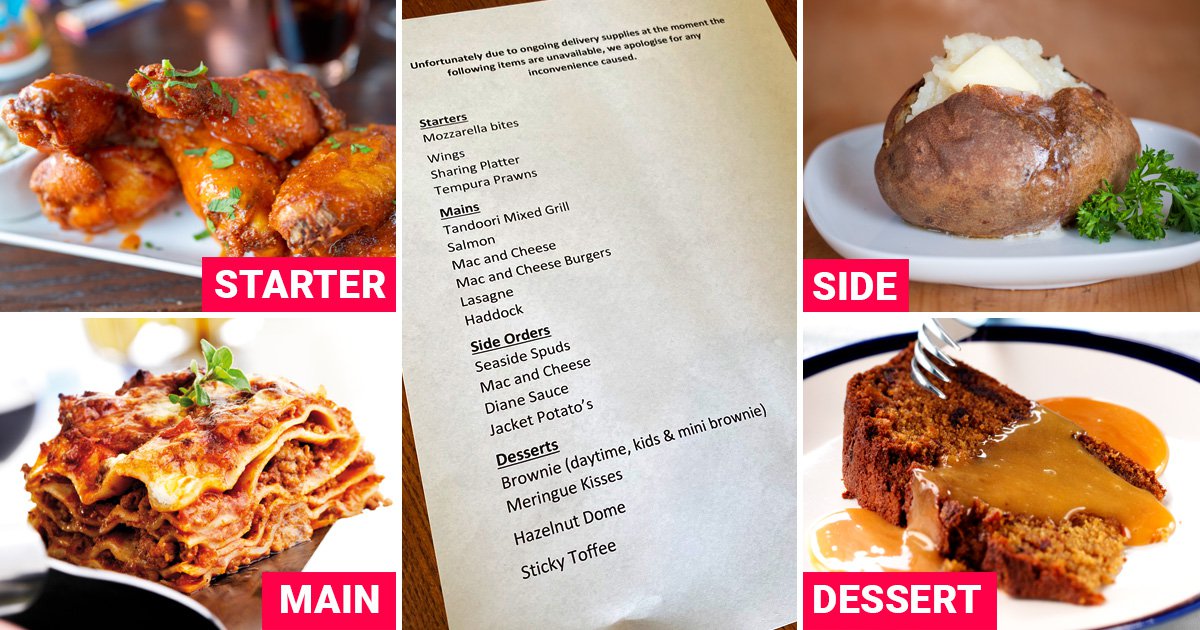 Hungry diners wondering what’s on the menu at a pub in Buckinghamshire may be disappointed.

Because one look at The Charter’s new menu will show only its starters, mains, sides and desserts which are not available.

The pub in Aylesbury appears to have become the latest victim of the nationwide shortage of lorry drivers.

In a note at the top of the ‘inverse’ menu it apologised for the inconvenience and blamed ongoing issues with deliveries for causing difficulties with supplies.

It contains four starters, six mains, four sides and four desserts which customers can only wish they could order.

The range of missing ingredients is extensive, with fish, meat, cheese and sweet treat dishes all making their way onto the unavailable list.

Across the UK, food has been in short supply in many supermarkets, with empty shelves becoming a common sight.

Surveys showed one in six shoppers said they have been unable to buy the vital products they need in the last two weeks.

A poll by the Grocer magazine has found two thirds of people are worried or very worried about potential shortages over Christmas.

The dearth of drivers, compounded by the Covid pandemic and Brexit, also contributed to weeks of queues for petrol.

Vacancies are not being filled fast enough, with Britain’s shortfall of drivers estimated to stand at 100,000.

Mark Smith, who runs train travel blog The Main in Seat 61, only missed out on his visit to the pub on one count.

He tweeted: ‘Weird. I’m in a pub with an inverse menu, of things you can’t have. (Shh, nobody mention Brexit…).

‘But on the plus side, found fuel on Friday so the kids are at school again.’

The pub chain Table Table which runs The Charter has been approached for comment.

Has Meghan Markle had her baby ALREADY? Duchess and Prince Harry ‘gave CLUE’