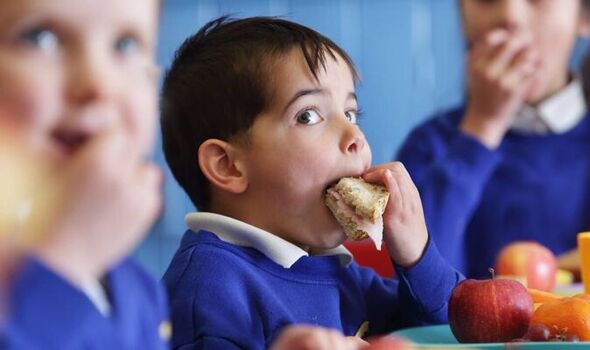 Those working in the most deprived schools, with the highest proportions of existing pupils eligible for Free School Meals, were more likely to say there were more pupils unable to afford lunch, at 59 percent, compared to 44 percent of those in the least deprived schools.

This indicates that pupils falling just outside of Free School Meals eligibility are increasingly going hungry, according to the social mobility charity The Sutton Trust, which specialises in education.

And this is hitting the ability of pupils to learn with 74 percent of the 6,200 teachers surveyed for the study reporting a rise in pupils unable to concentrate or tired in class.

Seventeen percent reported more families asking to be referred to foodbanks during the Autumn term.

Barbara Crowther, of the Children’s Food Campaign, said: “All children should be able to fuel their learning with a healthy hot meal at school every day.

“It’s nothing short of scandalous that teachers and schools are witnessing such acute levels of physical and emotional distress and the daily impact that lack of nutritious food is now having on their pupils’ ability to concentrate, learn and achieve.

“It’s time for the Government to show compassion and vision, and look at enriching the educational experience, instead of impoverishing pupils under the current means-tested income threshold of just £7,400 in England.

“That means urgently responding to the 800,000 children living in poverty in England but still not provided with school meals, as a clear, targeted step towards a progressive universal policy for the future.”

Despite calls to widen access to Free School Meals from the 22.5 percent of pupils currently eligible, Chancellor Jeremy Hunt did not do so in his November budget.

When asked about the proportion of pupils facing financial pressures that were affecting their ability to succeed in school, 38 percent of teachers said this is the case for at least a third of their class.

This rises to 72 percent in the most deprived schools.

Two-thirds of teachers believe the cost-of-living crisis will increase the attainment gap between the less well-off and the most well-off pupils in their school.

“It’s a scandal that in one of the world’s richest countries growing numbers of children are going without basics such as food and warm clothing.

“The facts are stark and shaming. Without radical intervention and increased provision for those who need it most, the cost-of-living crisis will produce a decline in social mobility, gravely endangering the long-cherished project of levelling up.”

England football star Marcus Rashford has led the campaign to increase the number of children eligible for free school meals.

A Government spokesperson said: “We have expanded access to free school meals more than any other government in recent decades, which currently reaches 1.9m children.

“We are also investing up to £24m in our National School Breakfast Programme, which provides free breakfasts to children in schools in disadvantaged areas.

“In addition, eight million of the most vulnerable households will get at least £1,200 of cost-of-living support this year on top of benefit from the Energy Price Guarantee, meaning they will be eligible for support which exceeds the average rise in energy bills by hundreds of pounds.”