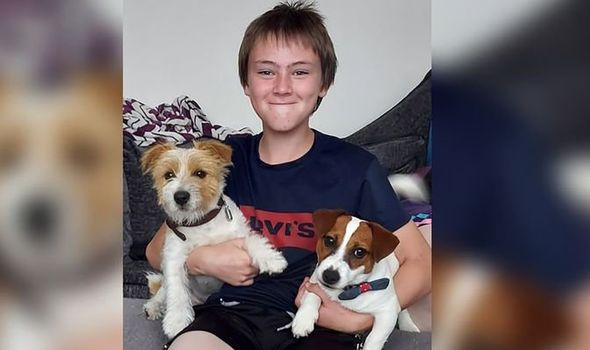 Phil Webster, 44, and his family are devastated after two big dogs, described as similar looking to Bullmastiffs, “made a beeline” for his two Jack Russell terriers, Bertie and Freddie, as he left his house with them for their walk. The dogs pinned eight-month-old short-haired Freddie against his property gates in a sickening rampage.

After Phil could free the little Jack Russell, he rushed him for the vets but the puppy died on the way.

“Just by the sheer brute force and the size of the dog, we couldn’t get him off,” Phil told Liverpool Echo.

“He had Freddie in his mouth like a rag doll and had no intention of letting him go. This other dog came snarling around, big teeth glaring and slobbering.”

Bertie fled to hide under Phil’s car outside the home in St Helens, Merseyside, on Tuesday evening.

The other dogs weren’t on leads, Phil said.

Phil, whose 11-year-old son Harry is particularly upset, added: “As I’m shutting the door I just heard this commotion. I just said behave you two, pack it in you two and then as I turned the corner, still on my property, these two great big dogs – I’ve never seen anything like it – just appeared from nowhere.

“I was shouting and screaming. I was shouting for these people (witnesses walking past his home) to stay where they were and to please help me. They sort of seemed to laugh it off basically, they couldn’t get away quick enough

“They said ‘we’ll be back, we’ll be back’ and they never did. They left me to it and they could see I was in distress.

“Freddie didn’t stand a chance, he was pinned against our gates.”

Vets told Phil even if he had got to the surgery, it would have been unlikely Freddie would have been saved. He suffered multiple puncture wounds to his abdomen, cuts and bruises.

Paul sustained minor scratches and rope burns from his dogs leads to his arms and, while Bertie suffered no injuries, he is “not himself at all.”

The dad added: “My sons is just devastated. He’s heartbroken. My wife, she’s not really spoken.

“We’re shocked. I know we hadn’t had him that long but he was such a character, everybody who I know just thought he was adorable and now it’s like an empty space.

“He was fantastic, we got him to calm our other dog down because he was on his own and he was a bit boisterous – but he did calm him down.

“They got on like a house on fire from day one. He’s just wondering around thinking where’s my mate.”

Phil put an appeal out on social media for more information to find the owners and said the amount of support from people, mostly from strangers, has been “overwhelming.”

“I just want to warn people about these dogs, they should be at least on leads or if they’re dangerous have a muzzle, especially on a public street where there’s lots of children and a school nearby.”

A spokesman for Merseyside Police: “Officers in St Helens are investigating following reports of a dog attack on Tuesday, 27 July.

“Officers were called to Dunmail Avenue, when it was reported that at around 9.45pm a man was walking his two Jack Russell terriers, when one was attacked by two dogs that were off their leads.

“The Jack Russell died a short time later and the man suffered an injury to his hand as a result of the attack. One of the dogs is described as being black, possibly a large, muscular bull mastiff type and the second, a brown dog of similar build but sandy brown in colour.

“The investigation is at an early stage but officers are pursuing a number of lines of enquiry and would urge anyone who has any information about this incident to come forward.”

Inspector Alyson Keenan said: “This was an appalling incident leaving a man injured and his dog sadly dead. I want to make it clear that we will not tolerate irresponsible dog ownership.

“It is a criminal offence to allow a dog to be dangerously out of control in a public place and dog owners have a responsibility to ensure their dog does is on a lead and under control.

“I would also ask anyone with information about this incident or dangerous dogs in their area to contact us so that we can take action.”

If you witnessed the incident or have any information, please contact Merseyside Police social media desk via Twitter @MerPolCC or Facebook Merseyside Police Contact Centre. You can also call 101 quoting incident reference 21000524632 or contact the independent charity Crimestoppers anonymously, on 0800 555 111 or via their online form here.

Pope Champions Refugees in Visit to Bulgaria, a Country Hostile to Them