The allegations come just a day after an encounter between the two air forces on Monday, in which the country’s defence ministry has claimed the UK was attempting to spy on it. Since the invasion of Ukraine, Russian President Vladimir Putin has repeatedly accused Britain of provocations, but has stopped short of any military response.

Yesterday (Tuesday), the Russian defence ministry claimed that the UK had requested permission for an RC-135 – a large reconnaissance plane made by Boeing and used by the UK and US militaries – to fly over its territory.

The ministry added that Russia’s air force had been tasked with preventing any violations of Russian airspace, but did not specify when and where the flight was planned to travel.

It said: “All possible consequences of this deliberate provocation will lie entirely with the British side.”

A UK Ministry of Defence (MoD) source denied that Britain had made the request. 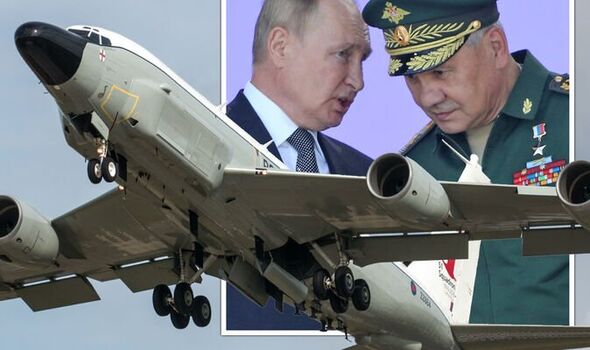 On Monday, Russia said it had scrambled a fighter jet to intercept one of the RAF’s RC-135s after it allegedly crossed over the Russian border near Svyatoi Nos, a small cape on the Baring Sea, in the far north of the country.

The nation’s defence ministry said a MiG-31, a Soviet supersonic aircraft, forced it to turn around.

However, the MoD accused Russia of recklessness, arguing it had been flying in neutral territory.

An MoD spokesperson said: “A Russian MiG-31 jet conducted an unsafe close pass of an RAF RC-135W Rivet Joint aircraft as it carried out a routine operation in international airspace over the Norwegian and Barents Seas on Monday, August 15. 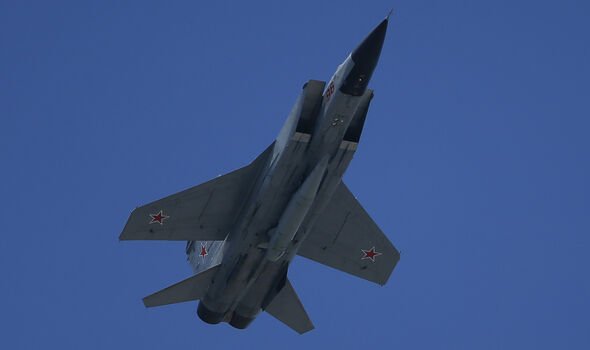 “The UK aircraft was in communication with Russian civilian air traffic control and its crew operated in a safe and professional manner.”

While Western nations are able to rely on satellite technology for reconnaissance, the RC-135 – which is able to fly at 39,000ft – has sensors which “soak up” electronic emissions from communication systems and radar, according to the RAF.

It has been deployed “extensively” in the fight against Islamic State, dubbed Operation Shader.

In July, Putin himself accused the UK and US of a “complex provocation” involving a British warship and a US spy plane. 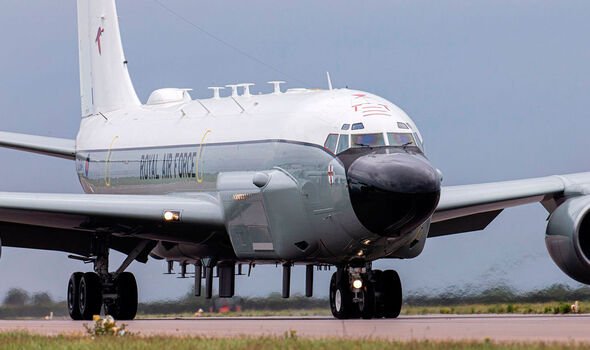 The HMS Defender sailed near the coast of Crimea on June 23, which Russia annexed from Ukraine in 2014, but has recently come under missile attack after Ukrainian President Volodymyr Zelensky vowed to take it back.

Echoing Putin’s claim that the US and UK had orchestrated the manoeuvre, he added: “I think that our intelligence agencies of course know who took that decision.

“But, of course, I think the essence of such operations is planned by all the same senior comrades – those over the ocean.” 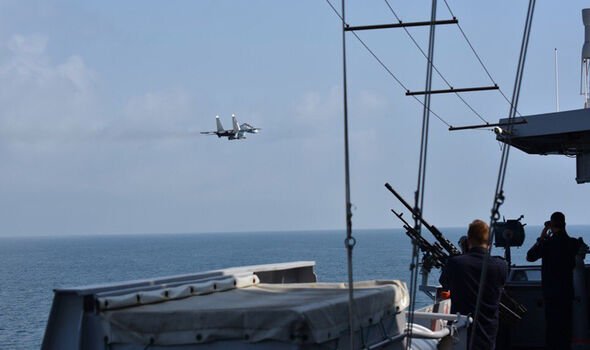 The Royal Navy rejected the accusation, stating that it was allowed in the waters as Crimea was not internationally recognised as Russian territory.

A spokesperson for Prime Minister Boris Johnson reiterated this explanation, stating that the Navy destroyer “was conducting innocent passage through Ukrainian territorial waters in accordance with international law”.

BBC correspondent Jonathan Beale had been on board HMS Defender at the time, and said it had been buzzed by Russian warplanes and a coastguard ship that threatened to open fire.

In late June, Russian fighter jets were accused of creating a “dangerous situation” in the Black Sea by repeatedly flying “dangerously low” over a Danish naval vessel in international waters.

Denmark’s Ministry of Defence said the jets had “carried out mock attacks” in an apparent attempt to scare the crew.

‘He misses momma’: Sweet pitbull cries down the phone at sound of mum’s voice