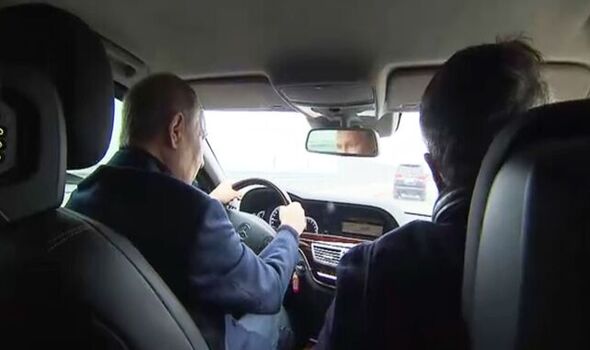 Warmonger Vladimir Putin has been filmed tightly gripping the steering wheel as he drives over the bridge linking Crimea to Russia three months after it was destroyed by a suspected Ukrainian airstrike.

The President of Russia appeared in a state media propaganda film showing the dictator drive over the structure that provided a crucial link to the illegally-annexed Ukrainian region.

In the short video Putin, who has been the subject of increased speculation about his health, can be seen with his hands in the 10am-2pm position on the wheel.

He appears to be holding on tightly and engages in some brief conversation with his passenger Deputy Prime Minister Marat Khusnullin.

Putin says: “How many people worked on the repairs?”, to which Khusnullin replies “500 people, three floating cranes, four barges and 31 pieces of equipment around the clock.”

The suspected Ukrainian airstrike that obliterated much of the structure was carried out on October 8 and seen as a major embarrassment for Russian forces. At the time Putin branded the attack an “act of terrorism”.

As Putin drives the German Mercedes across the bridge he further comments that he is driving on the right side of the structure because the left side “needs to be completed”.

The bridge, that also includes a rail link, was a major artery to the Crimea region that Russian illegally invaded in 2014. It cost around £3.2billion to construct the 11-mile-long bridge that was seen as personal project for Putin. Spanning a body of water known as the Kerch Strait, it became the longest bridge in Europe.

Kremlin spokesman Dmitry Peskov said Putin did not try to make a political point by driving the Mercedes and not a Russian-made Auris sedan, saying the president just used the car that was available.

While driving, Putin discussed the repairs of the Crimean Bridge with Marat Khusnullin, a deputy prime minister in charge of the project, an exchange that was broadcast by Russian television.

Ukrainian authorities said there was another such barrage on Monday, hours after Russian media reported two explosions at air bases in Russia. One reportedly happened at a base that houses nuclear-capable strategic bombers that have been involved in launching strikes in Ukraine.

Urgent search for dad of girl, 12, who vanished before Christmas

Fleamageddon: Pet owners warned mass outbreak is on the way