It was a happy-60th-birthday greeting to a Moscow theater director.

Unlike his Western European counterparts, who quickly posted congratulations on Saturday, Mr. Putin had not issued a statement on the president-elect even as night fell in Moscow on Sunday. Four years earlier, the Kremlin rushed out a message for President Trump within hours of the American television networks calling the race on election night.

“Putin is a good soldier and does not wag his tail before his enemies,” a prominent pro-Kremlin analyst, Sergei A. Markov, said in explaining the difference.

The early signs indicate that Mr. Putin is preparing for a deeply adversarial relationship with America’s next president. While Mr. Trump never delivered on Russian hopes of rapprochement between Washington and Moscow, his America-first foreign policy dovetailed with the Kremlin’s desire to weaken the Western alliance and to expand Russian influence around the world.

Mr. Biden, by contrast, is a president-elect whom Mr. Putin already has many reasons to dread. Mr. Biden sees Russia as one of America’s biggest security threats, promises to rebuild frayed ties with European allies and, as vice president, worked actively to support pro-Western politicians in Ukraine, a country at war with Russia.

To Russia’s governing class, the 77-year-old Mr. Biden was the preferred candidate of an American “deep state” — a huge network of spies and diplomats that, in the Kremlin’s telling, worked to undermine Mr. Trump and his efforts to improve ties with Russia. And Mr. Biden, unlike Mr. Trump, seems to many Russians to be the sort of American politician they detest the most: someone ready to meddle around the world in the name of democratic ideals, rather than respecting spheres of influence and engaging with Moscow in hard-nosed talks. 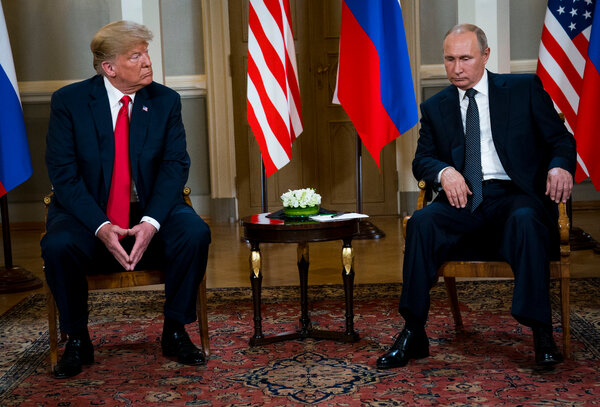 “There you have it, the notorious deep state that Trump had promised to get rid of,” Mikhail V. Leontyev, a commentator, intoned on the prime-time news in Russia on Saturday, describing Mr. Biden. “We wouldn’t give a toss about this if these guys didn’t try to get involved in all our business, and the probable winner has made it his mission to get involved in all the world’s business.”

As swing states counted votes in recent days, Russian state television increasingly adopted Mr. Trump’s assertion that the Democrats had stolen the election. A reporter in Washington for Russia’s state-run Channel 1 ridiculed the street celebrations of Mr. Biden’s victory as those of people “crying, hopping around and getting drunk.” On a Sunday-night news show, the host Dmitri Kiselyov said the election showed the United States to be “not a country but a huge, chaotic communal apartment, with a criminal flair.”

The vitriol on Kremlin-controlled television, and the lack of a quick congratulations for Mr. Biden, was notable given that Mr. Putin appeared to be trying to distance himself from Mr. Trump as Mr. Biden emerged as the clear favorite in recent months. Some Russian analysts and politicians had even speculated that new leadership in Washington could be a good thing for Moscow.

“There are increasingly few within the Russian elite who see Trump as an objective in himself,” Tatiana Stanovaya, a political commentator, wrote in an essay titled “A Farewell to Trump?” She added that there was “also a feeling of Trump fatigue,” even in the Kremlin.

Indeed, Mr. Putin chose this fall not to give Mr. Trump what would have been a prized foreign policy victory: a renegotiated New Start nuclear arms deal, the last remaining major arms control agreement between the countries.

Mr. Trump’s lead negotiator, Marshall Billingslea, went so far as to announce that the two leaders had a “gentleman’s agreement” for a renegotiated deal. Yet, within hours, a deputy foreign minister, Sergei A. Ryabkov, called the Trump administration delusional. “Washington is describing what is desired, not what is real,” he said.

Instead, in a television interview last month, Mr. Putin lauded Mr. Biden as being prepared to extend the treaty. And in what may have been a backhanded compliment, he praised the Democrats as sharing leftist ideals with a party of which Mr. Putin was once a member: the Communists.

“We will work with any future president of the United States — the one whom the American people give their vote of confidence,” Mr. Putin said.

The C.I.A. said earlier this year that Mr. Putin appeared to be interfering in the election on behalf of Mr. Trump. The Kremlin has denied meddling in American politics, and many analysts in Moscow noted that no fresh, substantiated allegations of Russian interference had emerged from the United States since Election Day.

Indeed, the notion that Mr. Trump’s departure from the White House could reduce American anger about Russian interference in the 2016 election appeared to be the biggest silver lining of Mr. Biden’s victory, some politicians and analysts said.

“It’s not that we believe in a sobering-up in Washington, but the key irritant might go away,” Konstantin Kosachev, the head of the Foreign Affairs Committee in the upper house of the Russian Parliament, wrote on Facebook. “Wouldn’t that be a reason to resume talks on arms control, for instance? We are definitely ready.”

Mr. Biden could also benefit Russia by bringing the United States back into the nuclear deal with Iran, an agreement to which Moscow is a party, another Russian lawmaker, Leonid E. Slutsky, said. In 2018 Mr. Trump withdrew the United States from the deal, which President Barack Obama had helped broker among world powers to halt Iran’s nuclear weapons program.

Even as the Kremlin stayed mum on Sunday, Mr. Putin’s staunchest domestic opponent — the opposition leader Aleksei A. Navalny — offered well-wishes on Twitter to Mr. Biden and Kamala Harris, the vice president-elect. He also congratulated Americans on holding “a free and fair election,” an indirect sideswipe at the Putin government.

“This is a privilege which is not available to all countries,” Mr. Navalny, who is recovering after being attacked with a nerve agent in Siberia, wrote. “Looking forward to the new level of cooperation between Russia and the US.”

The Kremlin and its backers have long claimed, without evidence, that opposition activists like Mr. Navalny are the instruments by which America’s “deep state” implements its anti-Russian agenda. The Russian news media often says that the United States has engineered “color revolutions” across the former Soviet Union.

“Financing for a color revolution against Putin, I believe, will sharply increase,” Mr. Markov said.

Mr. Putin portrays himself as a defender of Russia against an encroaching West. A tougher Russia policy in the United States could play to his advantage, said Sam Greene, director of the Russia Institute at King’s College London.

“Conflict with the West and the United States in particular form an important part of Putin’s legitimacy,” Mr. Greene said.

Oh dear Boris! Accidental message hidden in US election post – and it will infuriate Biden

Primary School applications: When will YOU find out if your child has their school place?

Taiwan says it is having 'good interactions' with Biden team

Couple plans to leave money to charity after their death in new campaign to promote legacy giving
We and our partners use cookies on this site to improve our service, perform analytics, personalize advertising, measure advertising performance, and remember website preferences.Ok