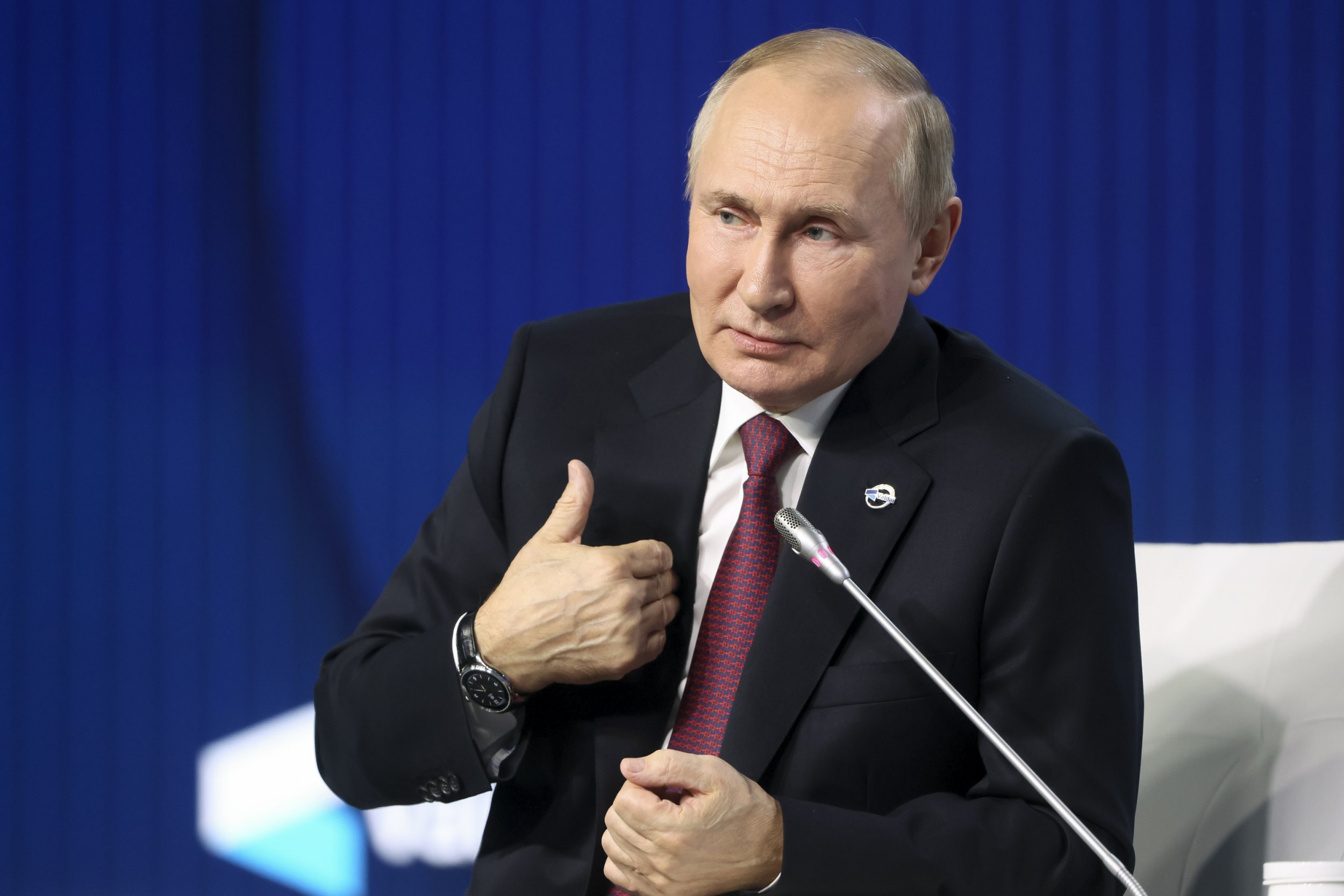 President of Russia Vladimir Putin has said former British prime minister Liz Truss was ‘crazy’ to have had concerns over him using nuclear weapons.

She must have been a ‘bit out of it’, Mr Putin said, and claimed to have ‘never said anything proactively about the possible use of nuclear weapons’.

‘We have only hinted in response to statements made by Western leaders,’ he added.

Ms Truss told the UN General Assembly in September that Mr Putin’s nuclear threats are nothing more than ‘sabre-rattling’.

But Mr Putin, in comments unlikely to reassure Ukraine or Western nations, said fears over the use of nuclear weapons are ungrounded.

‘We have no need to do this. There’s no sense in it for us, neither political nor military,’ he said.

The remarks came during a nearly four-hour speech and question-and-answer session in Moscow today.

His address was a Russian bingo card of tropes and go-to scapegoats, from ‘dozens of genders’ and ‘gay parades’ to ‘neoliberal elites’.

But the room bristled with tension when moderator and Fyodor Lukyanoz asked Mr Putin why his war against Ukraine hasn’t quite gone to plan.

‘Ahead is probably the most dangerous, unpredictable and at the same time important decade since the end of the Second World War,’ Mr Putin told members of an annual foreign policy conference.

The Ukraine war, he said, is only one ‘tectonic shift of the entire world order’.

‘The historical period of undivided dominance of the West in world affairs is coming to an end. The unipolar world is becoming a thing of the past,’ he said.

‘We are at a historical frontier,’ he added.

Elsewhere in the sprawling speech, Mr Putin dedicated time to take swipes at the US and Europe for trying to impose their ‘strange’ values on the world.

Mr Putin said the West is not able to ‘single-handedly government humanity’ but is ‘desperately trying to do it’.

‘Most peoples of the world no longer want to put up with it.’

‘In the US, there’s a very strong part of the public who maintain traditional values, and they’re with us. We know about this,’ Mr Putin told members of Valdai Discussion Club, a Moscow-based think tank close to the Kremlin.

Case and point, lawmakers in Russia’s lower house of Parliament, the Duma, today backed a bill that would broaden the country’s ban on so-called ‘gay propaganda’ to include both minors and adults.

COVID-19: Mother warns coronavirus ‘can happen to anybody’ after teenage daughter dies on day she was to get vaccine