MOSCOW — President Vladimir V. Putin of Russia on Friday proposed a truce with the United States in cyberspace, without acknowledging that Russia has used the internet to interfere in American politics.

Mr. Putin issued an unusual written statement outlining a four-point plan for what he called a “reboot” in the relationship between the United States and Russia in the field of information security. Moscow and Washington, he wrote, should issue “guarantees of non-intervention into the internal affairs of each other, including into electoral processes.”

The United States and Russia should develop a bilateral agreement “on preventing incidents in the information space,” modeled on Cold War-era deal making, Mr. Putin wrote.

But beyond the conciliatory language, Mr. Putin’s statement offered no hint that Moscow was prepared to make any concessions on cybersecurity matters. Russia continues to deny interfering in American politics, while insisting that the United States meddles in Russian politics by backing opponents of Mr. Putin.

“As we have said more than once, there is no basis” for claims that Russia has meddled in American elections, Russia’s foreign minister, Sergey V. Lavrov, said in his own statement on Friday. “We are in favor of a professional and constructive discussion of all existing problems and claims at the negotiating table.”

Russia has floated similar proposals before, including when Mr. Putin met with President Trump in Helsinki, Finland, in 2018. They drew interest from Mr. Trump but were otherwise roundly rejected in Washington, where lawmakers asked why the United States would work on cybersecurity with a country that had used hacking and online disinformation to meddle in the 2016 election.

This time, Mr. Putin is calling for a reset less than six weeks before an American presidential election that could put an outspoken critic of the Kremlin — former Vice President Joseph R. Biden Jr. — in the White House. The move appeared at least in part to be an attempt to present a friendlier face in response to American officials’ recent statements that Russia had mounted clandestine efforts to weaken Mr. Biden in the presidential race.

“It’s possible that in the Kremlin they understand that Biden is likely to win,” said Andrei Kortunov, director general of the Russian International Affairs Council, a research organization close to the Russian government. “They are preparing for a Democratic administration that could be even tougher toward Russia than a Republican one.”

Christopher A. Wray, the director of the F.B.I., warned last week that Russia was actively pursuing a disinformation campaign against Mr. Biden. And a recent C.I.A. analysis concluded that it was likely Mr. Putin was continuing to approve and direct interference operations aimed at raising Mr. Trump’s re-election chances.

“These measures are aimed at building up trust between our States, promoting security and prosperity of our peoples,” Mr. Putin’s statement said. “They will significantly contribute to ensuring global peace in the information space.” 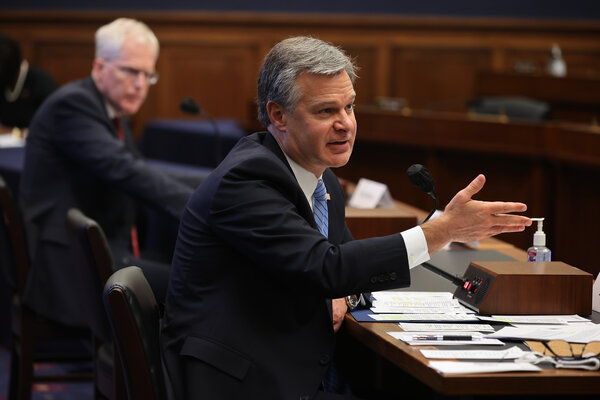 Two Russian political analysts with ties to the Kremlin said in interviews Friday that even if Mr. Putin’s proposal was a genuine attempt at improving the relationship with Washington, they did not expect it to go anywhere. Mr. Kortunov said Mr. Putin had not signaled that he was ready to give any substantial ground in the dispute over election interference.

“It’s obvious that the Kremlin would, of course, prefer not to quarrel with Washington, no matter the election result,” Mr. Kortunov said, noting the risk of a President Biden seeking to impose new sanctions on Russia. “But they would like to avoid these challenges without paying a serious price.”

For instance, Mr. Kortunov noted, the Kremlin has not made any public effort to rein in Yevgeny V. Prigozhin, the Russian business magnate indicted by the United States for helping spearhead interference in the 2016 election.

On the contrary, Russia’s relationship with the West has only deteriorated further in recent weeks. The unexplained nerve-agent attack on Aleksei A. Navalny, the Russian opposition leader now recovering in Berlin, stirred revulsion in European countries including Germany and France — places where Mr. Putin had been able to count on some measure of sympathy. And Mr. Putin’s backing for Aleksandr G. Lukashenko, the Belarusian autocrat who launched a brutal crackdown on pro-democracy protesters last month, demonstrated the Kremlin’s hard-line pursuit of a post-Soviet sphere of influence at the expense of human rights.

Fyodor Lukyanov, a Moscow foreign-policy analyst who advises the Kremlin, said Friday’s cybersecurity proposal underscored that Mr. Putin is now in a far more conciliatory mood than he was at the height of the Ukraine crisis five years ago. But he said American distrust of Russia was so deep that he did not expect Mr. Putin’s proposal to be taken seriously in Washington — and that relations could take another step downward if Mr. Biden wins the presidency.

To be sure, a Biden victory could bring some strategic benefits for Russia, analysts in Moscow say. They expect Mr. Biden to be more amenable to extending the New Start treaty, the nuclear-arms pact set to expire in February. And some believe that a Biden presidency could reduce the pressure on Iran, a key Russian ally.

But Mr. Biden could be expected to take a much tougher stand than Mr. Trump against Russia in Ukraine and on matters of human rights. Looming over everything would be the dispute over Russian election interference, Mr. Lukyanov said.

“There will clearly be people in the Biden administration who view Russia as being at fault for the loss of 2016 and will transfer their personal hurt, and their personal revenge, onto the relationship,” Mr. Lukyanov said. “Nothing good will come of it.”

A crucial stretch of the race is about to start as President Trump’s Supreme Court pick and his first debate with Joe Biden loom. Read live updates.

Many rules have changed during the pandemic, making it harder to figure out how to cast your ballot. This interactive guide can help you ensure your vote is counted.

He Built a Holocaust Memorial by a Far-Right Leader’s Home. Now He’s Under Investigation.