MOSCOW — Last weekend, while the police in Moscow forcibly rounded up more than 1,000 anti-Kremlin protesters, the largest such mass detention in years, President Vladimir V. Putin was out on the Baltic Sea, sinking beneath the waves in a bathysphere.

Surfacing from his latest action adventure after inspecting a Soviet submarine lost during World War II, Mr. Putin paid tribute to its crew, then concluded his remarks by saying, “I love reading and I love history.”

Yet a different kind of history seemed to preoccupy the Kremlin when it came to the demonstrations — the history of clearing the political landscape of dissenters. The machinery of legal repression ground into action, aimed at snuffing out a wave of weekly protests in Moscow, although more are planned for Saturday and Aug. 10.

At least 10 key participants in the July 27 protests will be charged with fomenting mass civil unrest and violence, which carries a prison term of up to 15 years, investigators announced on Thursday. The largely peaceful protests rippling through a chilly Moscow summer were prompted by the city’s Electoral Commission barring opposition candidates from registering for city council elections on Sept. 8.

In the most immediate sense, the fierce government reaction is aimed at preventing any opposition figure from gaining a toehold on the political ladder — including a seat on the 45-member city council. 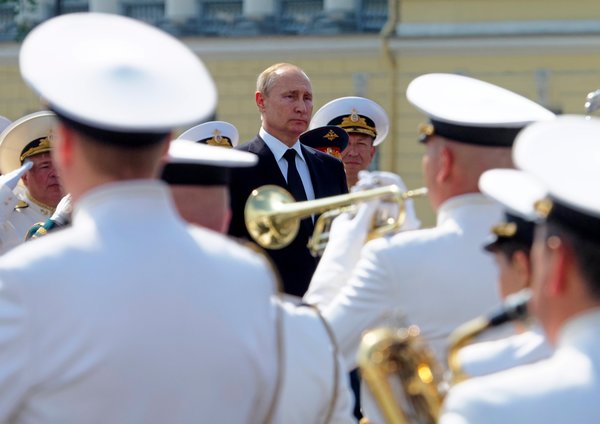 There is a deeper level, however. The protests and the harsh reaction can be seen as the opening salvo in an expected showdown over what happens in 2024, when Mr. Putin is not allowed to seek a fifth term as president. He is expected to find a way, sooner rather than later, to reshape Russia’s Constitution or to somehow stay on, laying the groundwork far in advance.

The Constitution limits a president to two consecutive terms, so in 2008 Mr. Putin became prime minister but remained the real authority in the country. He returned to the presidency in 2012, and lengthened the presidential term from four years to six.

The 2012 maneuver set off the biggest anti-Kremlin marches in decades.

If Mr. Putin is eyeing a similar move, this is an inopportune moment to allow even relatively small protests to unroll in downtown Moscow — especially since Russians are generally in a surly mood, and the president’s approval rating has been trending downward for a year.

Most of Russia’s 143 million people are surviving on stagnant incomes in a struggling economy. Nearly 21 million live below the poverty line, an increase of 500,000 this year, official statistics show. Most Russians live in a gloomy, dilapidated world of terrible roads, crumbling buildings and unpredictable medical care.

The central government takes in revenue generated across the country by natural resources like oil and gas, and sends little back.

Mr. Putin and his circle of security advisers have long feared the potential for a “color revolution” of the kind that twice toppled governments in neighboring Ukraine. These K.G.B. alumni treat even small movements and civil society organizations as if they might generate a wave that could swamp the Putin administration for good.

The Bolsheviks, led by Lenin, were a marginal faction in 1917, and even he held out little hope that they could win the revolution — but then they seized the government in months. This is familiar history to the people in the Kremlin.

The 57 rejected candidates for the Moscow council include around 17 staunch Kremlin critics. Most of them have been jailed on sentences of up to 30 days on charges linked to the demonstrations.

One opposition politician who refused to compromise with City Hall over the location of the next protest was grabbed outside the negotiating room and sent to prison for a month.

“By the reaction of the authorities, we see that this frightens them,” said Konstantin von Eggert, a political analyst. “They are scared of the first stone that can start an avalanche.”

Some analysts view the sudden illness suffered by Aleksei A. Navalny, the main opposition leader, while serving a 30-day jail sentence, as a warning that the government could play even rougher. The government described his condition as an allergic reaction and rejected his allies’ suggestions that he had been poisoned. He has requested an official investigation.

Mr. Putin himself has not commented publicly on the protests, leaving that to various proxies.

Sergei S. Sobyanin, the mayor of Moscow and a man sometimes mentioned as a future prime minister, characterized the protesters as a riotous mob, alleging that many participants had come from outside Moscow, intent on storming City Hall by force.

“He who cries the loudest takes the power?” he said in an interview televised nationally. “We’re not in Zimbabwe here, are we?”

Tabloid television stations smeared the opposition candidates, even suggesting that one woman, frustrated over not being registered, had gone home, gotten drunk and beaten her young daughter.

Other government-funded news organizations and officials dusted off a favorite Soviet chestnut, alleging that American and Swedish secret agents had fomented the unrest. No evidence was presented.

Coverage on state-run television stressed that the protesters had no permit, reporting that the police had been provoked under a hail of bottles, asphalt chunks and trash bins. Some demonstrators had wielded knives, hammers and gas cartridges, other reports said.

The government presented somewhat contradictory figures about the demonstrators. An Interior Ministry statement said there were 3,500 protesters, of whom 1,074 were detained. Yet the court charge sheet for one opposition figure said that 10,000 had participated.

OVD-Info, a respected independent organization that tracks court cases, said 1,373 people had been detained. Most have been released.

The government has compromised with protesters three times this year, and the huge deployment of police officers to block avenues near Moscow’s City Hall suggest that the Kremlin felt enough was enough.

Mr. Putin pulled the plug on plans to build a huge Russian Orthodox cathedral in the central city of Yekaterinburg after protests there. Months later, law enforcement officers started detaining the movement’s leaders.

Plans to carve a huge dump for Moscow’s garbage out of the forest in the northern Arkhangelsk Province were paused after extended local protests. Then demonstrations in Moscow, over patently fake drug charges against a journalist, led to his release and the firing of several senior law enforcement officials.

In those cases, protesters wanted the government to resolve an issue, said Abbas Gallyamov, a political consultant. “They didn’t challenge Putin’s power as such,” he said. “They appealed to him to solve their problem.”

The current protests are demanding power, even if just a municipal council seat. “Here, the government is absolutely not ready to give in,” Mr. Gallyamov said.

The Moscow city government offered to allow a protest on Aug. 10 on Sakharov Avenue, near the center but distant from City Hall. Organizers rejected that habitually sanctioned venue, calling it a “reservation” or a “corral.” Smaller protests are also being organized in other Russian cities.

Many demonstrators are young. They grew up not in the Soviet Union, but in a Russia where they could chose everyday things like their shoes, their education and their relationships. So why not their politicians, they ask.

Surveys show that Russians aged 18 to 24 — a small generation, given the low birthrates in the chaotic 1990s — watch state television the least of any demographic in the country and are therefore the least susceptible to its cheerleading that Russia is a paradise compared with the wicked West.

One of the most popular memes to emerge from the last protest was a photo of a teenage woman reading the Constitution, which contains the right to protest peacefully, in front of a line of helmeted police officers bristling with shields and truncheons.

The government squelched the 2012 anti-Kremlin protests, known as the Bolotnaya Square demonstrations, by sentencing a few participants to jail terms of up to four and a half years. Demonstrators think the same strategy could be at play again.

“There is the desire to show strength in Moscow, but this will not stop the protest movement unless they start imprisoning people for 15 years,” said Mr. von Eggert, the analyst. “This will continue in a certain form, but whether it will change the country, no, not yet. It will keep the flame alive.”