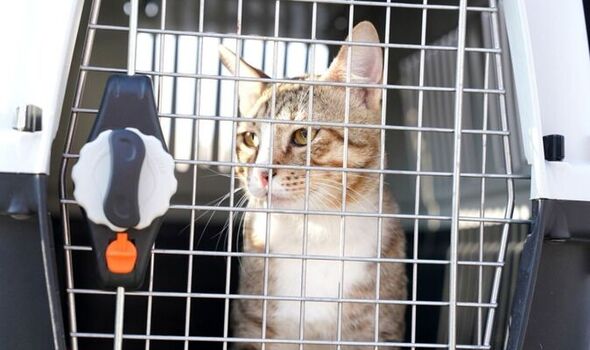 The stray cat, nicknamed Dave, was adopted by footballing legends John Stones and Kyle Walker. The Manchester City duo were pictured with the lucky feline most evenings and he quickly became the team’s unofficial mascot during the World Cup 2022.

Dave became a regular around the England camp and often featured on the players’ Instagram pages.

They befriended the stray cat at the Al-Wakrah hotel, where the team had been staying during the tournament.

Walker told the FA’s official media channel: “He was just there one day so we’ve just adopted him, me and Stonesy.

“Dave is welcome to the table. Some people really don’t like the cat, but I love him.”

Early in the tournament, Walker promised to take the feline home if England won the World Cup.

But, despite England’s loss to France in the quarter-final, as the squad began their journey back home, the football hero kept his promise.

He was put in a pet carrier yesterday as Three Lions stars checked out of their hotel and headed for the airport.

Dave has been taken to the vet where he will receive all the required vaccines and undergo checks before he makes his way to the UK.

Once he’s ready, Dave will be transported back to England where he will spend four months in quarantine before being reunited with the players who adopted him.

Speaking about Dave on the England Instagram account, Stones said: “The first day we got there, we got like little table around the corner, the next minute Dave pops up.

“Now every night he’s sat there waiting for his food. But the other day he actually didn’t eat all of his food, we were a bit annoyed at him, think he’s getting a bit greedy.”

Stones also posted a picture of himself giving a thumbs up as the cat relaxed under his chair with the message: “Dave’s joined us for dinner #mascot.”

The cat was even brought up during press conferences and the players were asked about their new feline friend.

Walker said: “Dave is fine. He had a little scrap with another cat the other night. I think they are fighting over territory and the food. But he’s doing well.

“Hopefully I can stick to my promise that he will come home with us if we were to win the World Cup. Dave’s fine, thank you for asking.”

But the football stars have now decided to take Dave home regardless of the disappointing result from yesterday’s game.

It is unknown which of the England stars will be adopting the tabby on his arrival.

What is the Lancaster Bomber flight path this weekend?