With the feud between Princes William and Harry still echoing and the BBC facing unprecedented criticism over the Martin Bashir scandal, the Queen received cheers on the Royal Navy flagship that carries her name. In her first large-scale public solo engagement since the death of the Duke of Edinburgh, the 95-year-old monarch flew by helicopter to Portsmouth yesterday to wish luck to the crew of HMS Queen Elizabeth before it began the official part of its maiden deployment to the Indo-Pacific at 9.30pm last night.

Wearing a red cashmere coat and a crepe wool dress by Stewart Parvin, a Rachel Trevor-Morgan hat, and the scarab brooch – a gift from her beloved husband – she was greeted by the ship’s commanding officer, Captain Angus Essenhigh, and Commodore Stephen Moorhouse, commander of the UK Carrier Strike Group (CSG).

Her Majesty was shown a map highlighting the route the £3billion ship will take during her 26,000-mile, seven-month deployment to the Far East and also had a chance to meet some of the 1,700 personnel on board, which include Royal Navy sailors, Royal Air Force airmen and women, Royal Marines, and 250 United States personnel.

Looking at the size of the 4.5-acre ship, the Queen commented: “There’s plenty of room on board.”

She was introduced to Chief Petty Officer Paul Brookes, 40, and son Morgan, a 20-year-old marine engineer and technician, who are both serving on the carrier.

Paul, a father of six, said: “The Queen certainly had a sparkle in her eye when she heard that Morgan and I were father and son and we are both serving on board at the same time. I think she liked that. I told her I was very proud.”

When presenting a medal for long service and good conduct for 15 years in the Royal Navy, to Petty Officer Matthew Ready, 33, the Queen was told he had served on HMS Illustrious during a disaster relief mission in the Philippines. 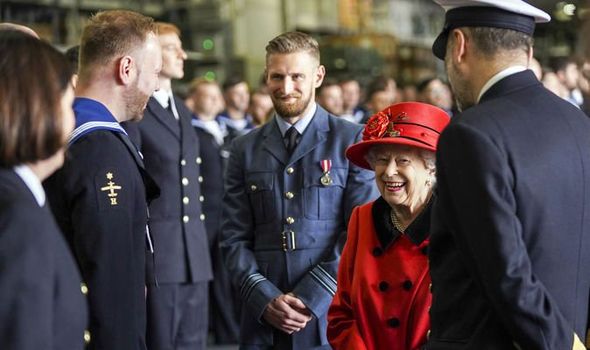 He said: “The Queen and the Duke of Edinburgh were coming on board HMS Illustrious once when we had an accident with an aircraft on board.

“The Queen remembered it and said, ‘I hope that wasn’t you or I shall have to ask for the medal back’.”

After receiving a briefing on the deployment she was given an official three cheers by the ship’s company as she ascended one of its aircraft elevators – designed to carry two F-35B strike fighters.

The visit was the first in a series of high-profile, in-person engagements the Queen will undertake in the coming weeks.

Captain Essenhigh said: “It was absolutely thrilling. It’s always a great privilege to host the Queen because she has such great ties to our service.

“To have her both as our sovereign and as our sponsor for the ship to come and wish us well as we set off has been very special. I think she was taken aback by the scale of the endeavour that we’re setting out on and the people and the equipment we have on board now.”

Commodore Moorhouse said the Queen was looking forward to some peace and quiet, as the F-35B jets based near her home in Sandringham would be away on the deployment for seven months. He said: “It wasn’t lost on her they are from Marham, just down the road from Sandringham, so she hears them regularly.” 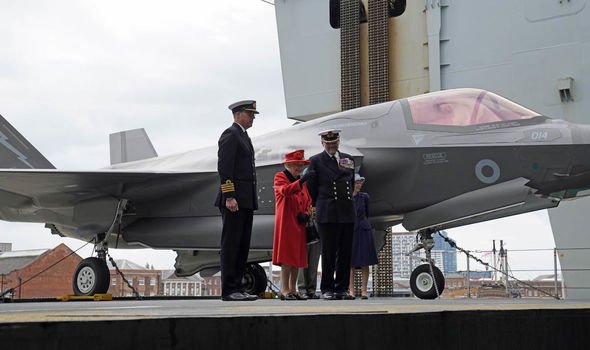 He added: “It was an absolute privilege to host Her Majesty on her flagship, she was really fascinated and interested in where we were going and was particularly struck not just by where the carrier was going but where the frigates and destroyers are going and the variety of the trip.”

He said morale was “fantastic” ahead of sailing and added: “The smiles on the faces is as much to meet Her Majesty but also knowing we will get away.”

He said: “Her Majesty is simply inspirational, because she is driven by a sense of duty and she has never let the nation down.

“But it’s important to remember that she has very close links with the Royal Navy; her grandfather, her father and even her husband were all naval officers, and they met HMS Invincible when it returned from the Falklands with Prince Andrew on board. 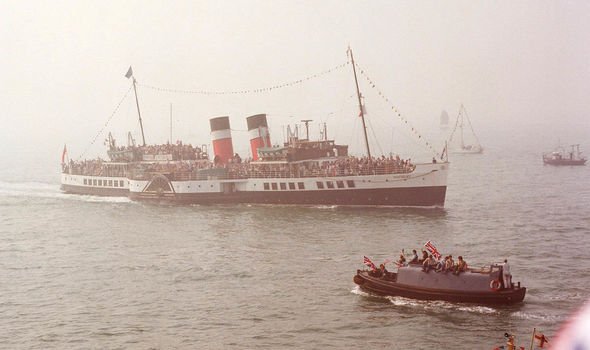 “And she also realises that producing two large carriers after the coalition government in 2010 almost gave them up has been a real national effort, involving thousands of British people.”

HMS Queen Elizabeth, the largest and most powerful vessel in the history of the Royal Navy, was built by a cast of more than 10,000, including more than 800 apprentices, in six dockyards from the banks of the Clyde to the River Torridge.

But the Carrier Strike Group is about more than just one vessel. It will be accompanied by six Royal Navy ships, a submarine, US destroyer USS The Sullivans and the Dutch frigate HNLMS Evertsen.

It will also boast 14 helicopters, the greatest quantity assigned to a single UK Task Group in a decade.

Its 28-week odyssey will see her travel through the Mediterranean to the Red Sea, then from the Gulf of Aden to the Arabian Sea and Indian Ocean to the Philippine Sea.