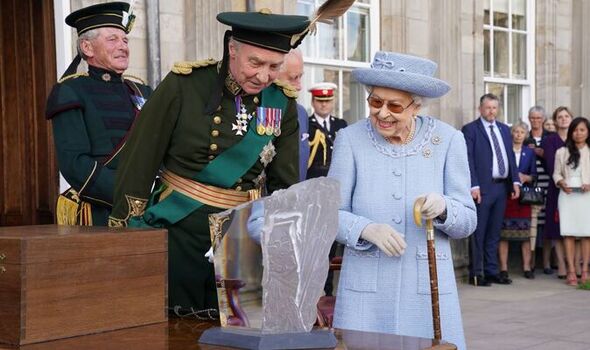 Smiling broadly and waving, the 96-year-old monarch shared a joke with the Duke of Buccleuch, Captain-General of the Royal Company of Archers, during a day of pageantry involving the Royal Family. She was given a Reddendo, a gift presented as an act of loyalty to the sovereign in a tradition started by Queen Anne in 1704.

Traditionally, the Royal Company of Archers, also known as the Queen’s Body Guard for Scotland, presents the monarch with two arrows at the ceremony.

But she received a striking glass sculpture designed by sculptor Colin Reid. “Oh how lovely,” the Queen said, joking with the Duke of Buccleuch that it was “much better” than two arrows.

Dressed in a dusky blue Angela Kelly outfit with matching hat, sat on a chair as more than 300 officers and archers took part in the parade and Prince Charles, known in Scotland as the Duke of Rothesay, shook hands with some of the archers. 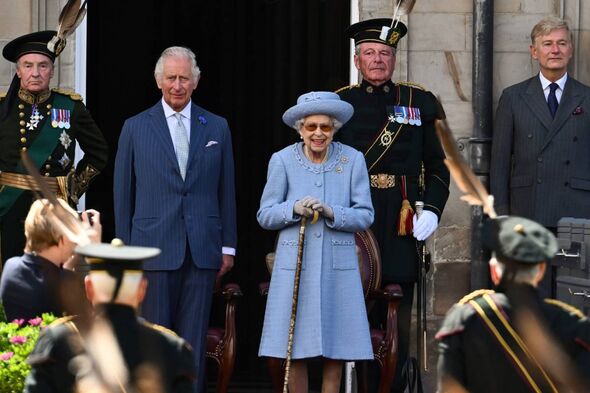 The Royal Company of Archers acts as the sovereign’s ceremonial bodyguard north of the border – a role first created in 1822 during a visit to Scotland by King George IV.

As Princess Elizabeth, the Queen first became acquainted with the Royal Company during a visit to Scotland with her father, King George VI in 1937, when he inspected them at the Palace of Holyroodhouse.

At the ceremony members of the Royal Company took off their hats and performed three cheers for the Queen.

Earlier, Charles and Princess Anne took part in a procession and service for the Order of the Thistle, the highest order of chivalry in Scotland, at St Giles’ Cathedral in Edinburgh.