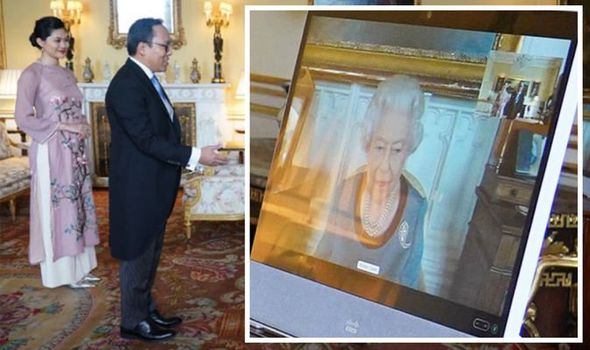 In images released by the Palace on Thursday afternoon, Queen Elizabeth II appeared onscreen for another virtual audience from Windsor Castle, where she is in residence. The occasion marked the second time Her Majesty, 95, has been seen since spraining her back.

The sovereign welcomed the Vietnamese ambassador Nguyen Hoang Long, who was at Buckingham Palace, via video link on Thursday.

During the audience, the ambassador presented his credentials and the letters of recall of his predecessor.

The ambassador was joined by his wife Vu Huong Giang for the occasion.

Her appearance comes after concerns were raised for Her Majesty’s health after she cancelled a number of appearances over the past month.

Her Majesty’s appearance at the Remembrance Sunday service at the Cenotaph last weekend was cancelled as she had sprained her back.

Buckingham Palace said she was “disappointed” she had to cancel her plan to attend.

Shortly before the service, the Palace issued a statement reading: “The Queen, having sprained her back, has decided this morning with great regret that she will not be able to attend today’s Remembrance Sunday service at the Cenotaph.

“Her Majesty is disappointed that she will miss the service.”

Her son Prince Charles, 73, laid a wreath at the service on her behalf.

On Wednesday, the Queen returned to public duties after the cancellation by hosting General Sir Nick Carter at Windsor Castle.

She greeted the most senior military officer in the Oak Room of the castle and donned an autumnal floral dress for the occasion.

‘I was bullied in the army, they pointed guns at my head’