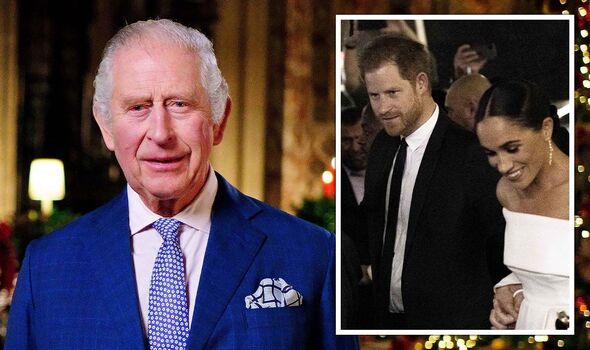 A former spokesman for the Queen has explained why Meghan and Harry were “never” likely to be mentioned by The King in his address yesterday. Richard Arbiter, who was the press spokesperson for Queen Elizabeth II from 1988 to 2000, explained the two were unlikely to ever receive air-time because family is never the focus of the royal speeches.

“What it is about is community spirit, thanking people we depend on in our daily lives and about the Commonwealth family.”

In his speech, Charles discussed his and his late mother’s belief in the “extraordinary ability of each person to to touch, with goodness and compassion, the lives of others, and to shine a light in the world around them.

“This is the essence of our community and the very foundation of our society.”

He also made reference to the “great anxiety and hardshop” people are going through as part of the cost-of-living crisis, and offered thanks to the armed forces and emergency services “who work tirelessly to keep us all safe”.

The speech was given from the King George VI Memorial Chapel, the resting place of both Charles’ parents.

Although his speech honoured the legacy of Queen Elizabeth, there was little focus on controversies surrounding Royal Family.

Before the speech, many wondered whether the monarch would mention the topic while a lot of royal experts suggested it was obvious Charles would abstain from the topic.

And afterwards, some newspapers suggested that the monarch deliberately avoided reference to Meghan and Harry as part of an attempt to send them a message. But Mr Arbiter’s comments stand firmly against this assertion.

Host of podcast Palace Confidential, Jo Elvin, similarly predicted that King Charles was unlikely to mention the controversy. She said: “I wouldn’t be surprised if the King has very quickly started clinging to a new mantra: ‘What would [Queen Elizabeth II] do?'”

She told The Independent: “On the matter of how to handle this incendiary ‘docu-series’, publicly he’ll want to avoid any comment or action that keeps this soap opera being discussed and getting more tawdry by the hour.

“Privately, however, he may need to overcome his reported desire to evade conflict and get everyone talking.”

Despite Charles respecting the tradition of staying quiet on family controversy during the speech, the monarch broke royal tradition in other small ways.

Charles was noticeably addressing the nation while standing up, which is a contrast from the Queen’s sitting addresses.

The location he chose was also different from where his mother used to deliver the Queen’s speech from.

Charles decided to speak standing at a chapel. In contrast, the Queen would usually sit behind a desk at home

School on lockdown as ‘armed officers’ swoop on ‘incident’