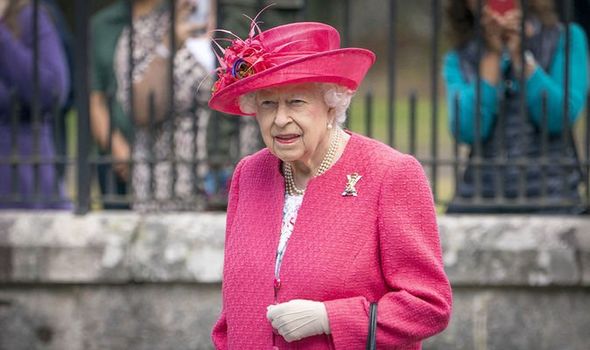 Dickie Arbiter, the sovereign’s official spokesman for 12 years, demanded an immediate sacking after intimate plans decades in the making were made public. Widespread anger erupted at a decision to publish an official programme of events for the 10 days following the death of Her Majesty, culminating in a state funeral at Westminster Abbey.

The revelation sparked fury coming just five months after the death of the Duke of Edinburgh, her husband of 73 years, and months before her momentous platinum jubilee.

Mr Arbiter, 81, said: “It is totally irresponsible and insensitive.There needs to be an inquiry as to where the leak came from and it dealt with immediately. Not a wrap over the knuckles, but a P45.”

Tory MP Sir David Amess called the leak “disgraceful”, adding: “It is outrageous. As if the poor woman hasn’t got enough to deal with at the moment, they are now talking about her funeral.

“I would hope Number 10 and the Cabinet Office will find whoever is responsible for this leak and ensure they are dealt with.”

A senior Government source said the Cabinet Office had started an investigation into the leak.

The source said: “If it turns out to be an old version that was widely circulated and does not include the most sensitive material, it might go no further than that.

“But if it’s a fuller version that is only circulated to, say, 10 people, then the Cabinet Office will launch a formal inquiry.”

The Cabinet Office refused to comment on the leak. But senior staff are understood to regard the timing of the dossier’s release as “distasteful” and disrespectful to Buckingham Palace.

The Queen, 95, is in good health and there is no suggestion the plans are being advanced.

The monarch has a busy autumn and winter diary, which includes the opening of the Scottish Parliament.

Security services and senior civil servants have known the plans ‑ which are regularly updated ‑ for years.

Royal funerals have for decades been suffixed with the word Bridge. This was the case for Diana, Princess of Wales, who died in 1997; the Queen Mother in 2002, and the Duke of Edinburgh, who died on April 9, aged 99.

The details for Her Majesty’s funeral are known as Operation London Bridge.

The Daily Express has chosen not to publish intimate details of the arrangements out of respect for the Queen and her family.

But it is anticipated the state funeral ‑ the biggest since Sir Winston Churchill’s in 1965 ‑ will be held at Westminster Abbey, where she was crowned on June 2, 1953.

It will be an official day of mourning and fall 10 days after her death. She will lie in state for three days with the public allowed to file past her coffin to pay their respects.

The Prime Minister will address the nation live on television and will deliver the first tribute. Gun salutes across the country will follow.

The level of detail contained in the documents published by website Politico will deeply concern a Government reeling from several high-profile recent leaks.

It lays bare in detail the urgent action that will be undertaken by every arm of the British state, including a vast overt and undercover security operation to manage unprecedented crowds expected to total millions, and any potential terror threat. It also warns of anticipated travel disruption as London comes to a complete standstill.

The revelations sparked widespread anger given the timing.

Next year, there are plans for an extra bank holiday to mark the Queen’s Platinum Jubilee, starting on June 2.

James Price, staunch royalist and former president of the Oxford Union, said: “We have all been through an 18 months unlike any other, with loss of loved ones and unprecedented turmoil in all our lives.

“The last thing we need now, when normal life is finally returning thanks to the excellent vaccine rollout, is to have to think too much about such a grim subject.

“On one level it’s comforting that the Government has plans for every eventuality in place, but I don’t think it’s much help to anyone to go into such grisly details now.

“Her Majesty, despite the loss of her beloved husband of over 70 years, seems in excellent health, and has a busy schedule planned. Let’s not let the pandemic make us obsessed with death and suffering, but appreciate how sweet the return of ancient freedoms is.”

The leak chronicled an extraordinary level of planning.

It will fall to the Prime Minister to meet the Queen’s coffin at a London railway station. The documents reveal where this will happen, the location and timings of her funeral service and where her body will lie in state, and for how long.

They also reveal details of how the new King, her eldest son Charles, will embark on a tour of the UK in the days after his mother has been laid to rest. Each part of the plan has been given a codename, as have the arrangements for Charles’ accession to the throne.

Buckingham Palace declined to comment yesterday. A Cabinet Office source said it would be inappropriate to do so on a matter so highly sensitive.

Buckingham Palace will be angry the Queen’s funeral plans, while not a state secret but confidential on a “need to know basis”, have been leaked and published.

Bridge is the suffix code for all such royal arrangements to which the broadcasters have had access for years for planning and logistics, as have the security services, the Mayor of London’s office and civil servants.

That someone has chosen to leak those for the monarch and Politico has chosen to publish them is not only irresponsible but depressingly insensitive especially given how the Queen said farewell in April to Prince Philip.

The excuse given for publishing will no doubt be on security and the influx of people into London.

People-managing is nothing new to the security services. Just look at the arrangements for the late Diana Princess of Wales in 1997 and the late Queen Elizabeth The Queen Mother in 2002, when more than a million and a half people poured into the capital.

Those responsible for crowd control are well aware of the task ahead and will have contingency plans.

The Queen, 95, is in excellent health, as can be seen by her busy programme this autumn.

There can be no excuse for the leak or the publication.

We now need urgent internal enquiries by all the organisations given, in good faith, advance notice of the arrangements in order to root out the source of the leak and hand the individual or individuals concerned their P45 and even prosecution.

There is only one word to describe Politico’s publication. Grubby.

Dickie Arbiter is ex-press secretary to the Queen

A new missile of callousness

The Queen has had to endure a host of cruelties recently ‑ the death of her beloved husband, the embarrassment heaped on her family by her son Andrew and the relentless attacks by her grandson Harry.

Now a new missile of callousness has been fired in her direction in the form of a leak to the website Politico about the official plans for her state funeral.

Whatever their rank or fame, no one should have to suffer such a voluble dissection of how the immediate aftermath of their own death will unfold.

Inevitably, Politico boasted about its supposed “scoop”, yet no public service was performed by this leak. It did not need Politico’s journalism to tell us that flags would be flown at half mast or that the coffin will lie in state at Westminster Hall.

Precisely because of this paper’s profound respect for Her Majesty, the Daily Express decided not to publish the details of Operation London Bridge. To do so, in our view, would have been both insulting and macabre. Yet, for all the hurt she might now be feeling, the Queen will rise above the media-concocted squall.

Just as importantly, there is not the slightest indication that Operation London Bridge will have to be put into action any time in the near future. Now aged 95, Her Majesty is in astonishingly good health.

Nevertheless, this grubby episode will rightly raise questions about the state machine’s ability to protect secrets. What is particularly worrying is how leaky the top of the Government appears to be, as shown by the recent disclosure of the Prime Minister’s conversations and information about the behaviour of Dominic Raab and Matt Hancock, which can only have come from their private offices.

But the Queen’s stature is greater than ever. When her funeral eventually takes place, it will be accompanied by the greatest outpouring of grief and gratitude ever seen in this country. Whatever this weekend’s ugly furore, it must be fervently hoped that such a sorrowful event will be a long time away.