The Queen delivered her second Queen’s speech in less than three months this morning. But some royal fans focused more on the monarch’s appearance rather than her words, written for her by Prime Minister Boris Johnson.

Two royal fans had the impression the Queen looked “frail” during this morning’s State Opening of Parliament.

Another wrote on the social media platform: “I think because the queen is in day dress it is more noticeable how frail she seems” 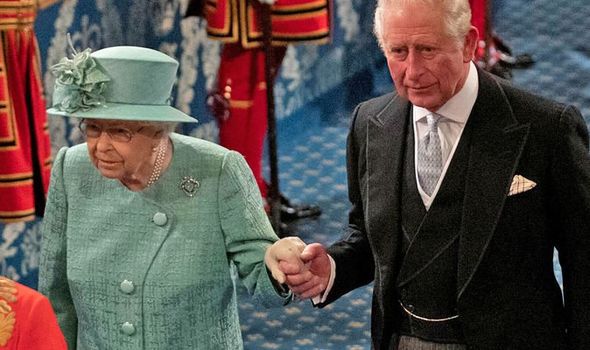 Another social media user argued Prince Charles should take the reins of the monarchy and allow the Queen to enjoy her 90s without the burdens of royal duties.

They wrote: “The Queen is in her 90’s and is delivering a speech in the Lords.

“Time for The Prince Of Wales to take over these things surely? He is sitting there anyway.”

The Queen was accompanied inside the House of Lords by Prince Charles, who held her hand while they were slowly proceeding towards the throne.

The monarch donned an aqua green with a matching hat, and she accessorised her outfit with cream-coloured gloves, her signature black handbag and black shoes.

As this was a dressed-down State Opening of Parliament ceremony, the Queen didn’t wear her ermine robe or a crown.

Similarly, Prince Charles wore a normal outfit rather than his uniform and medals.

Princess Eugenie salary: How do Eugenie and her husband Jack earn money?

A timeline of Northern Ireland since its birth 100 years ago