Audience members on BBC’s Question Time could be heard gasping in shock after a first time buyer revealed her experience with a mortgage lender.

The woman, Rabia, was responding to a question on the show about mortgages.

She said: ‘I want to know what the plan is for mortgages.

‘I was told my initial interest rate would be 4.5%. I was told today that the lender has pulled that offer and now the best offer I can get is about 10.5%.

‘I’m being told, you need to immediately look at putting your application through because if you don’t, the lenders may even pull these offers.

‘As a first time buyer I don’t think I can now afford to get a mortgage.’

Presenter of the show Fiona Bruce looked shocked at the revelation and other members in the audience could be heard gasping at the massive increase. 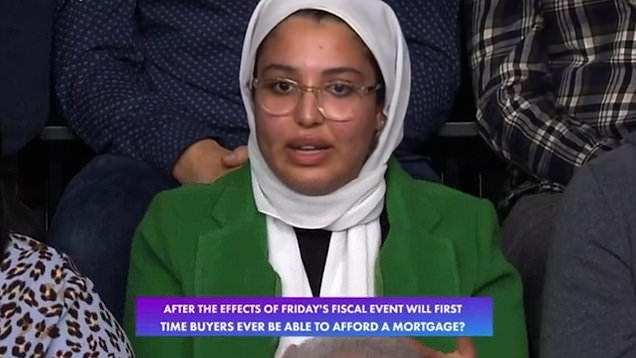 Rabia said: ‘I was given an initial rate about two weeks ago.

‘We’re in the process of getting all the documentation together, making sure everything is correct, ID and all of those things.

‘Today I was told the lenders are pulling those offers, those offers are no longer there.’

Responding to Rabia, government minister Paul Scully said: ‘A representative from the UK Finance who represents lenders was speaking just yesterday and was saying there are still more mortgage products now than there were 10 years ago, despite the reduction, so there’s still money around.

‘But you’re right. What you’re finding at the moment… about the constraints.

‘If you go back two and a half years to the beginning of covid, the first few weeks of lockdown, lots of businesses were scrambling around with furlough… those first few weeks were really, really, difficult.’

When Ms Bruce interjected to point out ‘that was caused by a pandemic’, Mr Scully responded: ‘It’s the uncertainty. We talked a lot earlier on about how the markets are trying to get through this and work out what’s happening.

‘The certainty we want to give is first of all by communicating far better.’

But Labour MP and shadow education minister Bridget Phillipson told him: ‘The answer is not to tell Rabia she’s basically wrong.’

The minister at the Department for Levelling Up, Housing and Communities responded: ‘I’m trying to make sure that we settle down the lending market so that she can get a better deal.

‘I can’t go into her individual circumstances clearly.’

Rabia responded: ‘I know I’m not getting a better deal.

She added the mini budget had had a ‘big impact’ on her life.

First time buyers like Rabia are struggling to afford mortgages as lenders withdraw offers in the wake of the government’s mini budget.

Across the country, house sales are already collapsing because lenders are pulling their mortgage deals with rates predicted to rise.

Following Liz Truss and Kwasi Kwarteng’s mini budget the economy has been plunged into further chaos.

The pound plunged to 1.03 against the dollar on Monday – just three days after the announcement which shook the markets.

Hull fire: Man and girl, 8, killed in house after neighbour desperately tries to save pair