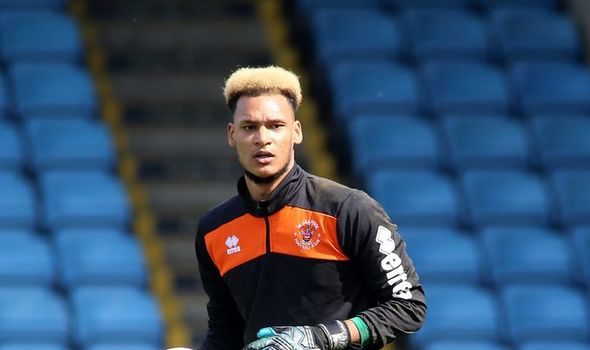 The thug also booted a plastic beer glass on to the pitch and tried to kick the match ball out of the stadium.

Simpson, of Nantwich, Cheshire, was later identified and arrested.

He pleaded not guilty but after a trial was convicted of racially aggravated intentional harassment. Simpson must return to court next month to be sentenced – and could be imprisoned for two years.

Senior crown prosecutor Leanne Kennedy said: “Dean Simpson subjected Myles Boney to vile racist abuse in what appears to have been a deliberate attempt to put him off at a crucial point in the match when penalties were being taken.

Gesture “Mr Boney was really shaken up by the racist abuse and has spoken of his shock and disappointment.

“The Crown Prosecution Service is working hard with the police to bring the perpetrators of this sort of offending to justice. The CPS hopes this case sends out a clear message that this sort of behaviour will not be tolerated in a civilised society.”

Meanwhile, police investigating an alleged racist gesture at a Premier League game have released a photo of a fan they want to identify. Northumbria Police said the supporter gestured towards Tottenham fans at Newcastle United’s St James’ Park on Sunday.

Newcastle have vowed to take the “strongest action” against anyone involved in discriminatory behaviour.

Superintendent Jamie Pitt, of Northumbria Police, said: “As a force, we do not tolerate hate crime of any kind within our communities.

“Ever since we were made aware of this alleged incident, we have been working closely with Newcastle United and our partners as part of a thorough investigation.”

Fears and hope among business owners as Brexit transition ends

UK Covid cases rise by nearly a third in a week