The Boeing RC-135W Rivet Joint was flying near Newark-on-Trent when it issued a 7700 emergency, according to maps from FlightRadar24. The alert means the crew determined they have an “urgent” or “distressing” situation. 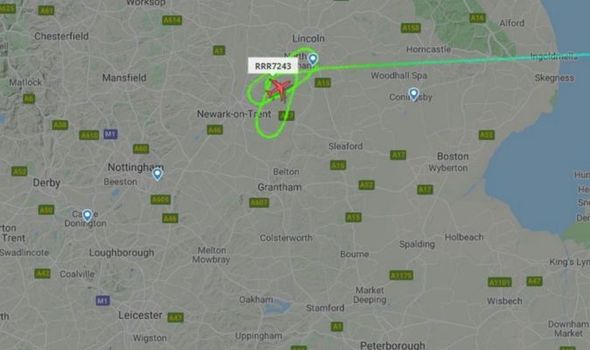 As the aircraft continued to fly the Lincolnshire area, it was joined by a Eurofighter EF-2000 Typhoon F.2

It is currently unknown as to why the distress call was issued.

According to the flight-tracking website, the aircraft looks to have landed near Waddington, possibly in RAF Waddington.

The role of a Rivet Joint aircraft is to carry out electronic surveillance and can be employed in strategic and tactical missions.

According to the RAF website, its “sensors ‘soak up’ electronic emissions from communications, radar and other systems”.

This latest incident comes after two pilots were forced to eject from a Royal Navy jet before it crashed into woodland in Cornwall last month.

The pilots were checked by medics at the scene before being taken to Derriford Hospital for further assessment.

The pair are understood to have suffered minor injuries.

The jet that crashed was a Royal Navy Hawk from 736 Naval Air Squadron, the Ministry of Defence confirmed.

The Ministry of Defence said in a statement: “Two pilots are being checked by medics after ejecting from a Royal Navy Hawk aircraft from 736 Naval Air Squadron during a flight from RNAS Culdrose.

“An investigation will begin in due course. We won’t be providing further detail at this time.”

Back in February, an RAF jet issued a 7700 squawk during a flight off the coast of Holyhead in west Wales.

An RAF spokesman confirmed the plane had suffered a fault.

They said it had been forced to return to base, where it landed safely.

An RAF spokesman confirmed: “A Hawk T2 from RAF Valley on a routine training mission, had a technical malfunction requiring it to return to base, where the aircraft landed safely.”

Express.co.uk has approached the Ministry of Defence for a comment on the latest incident.