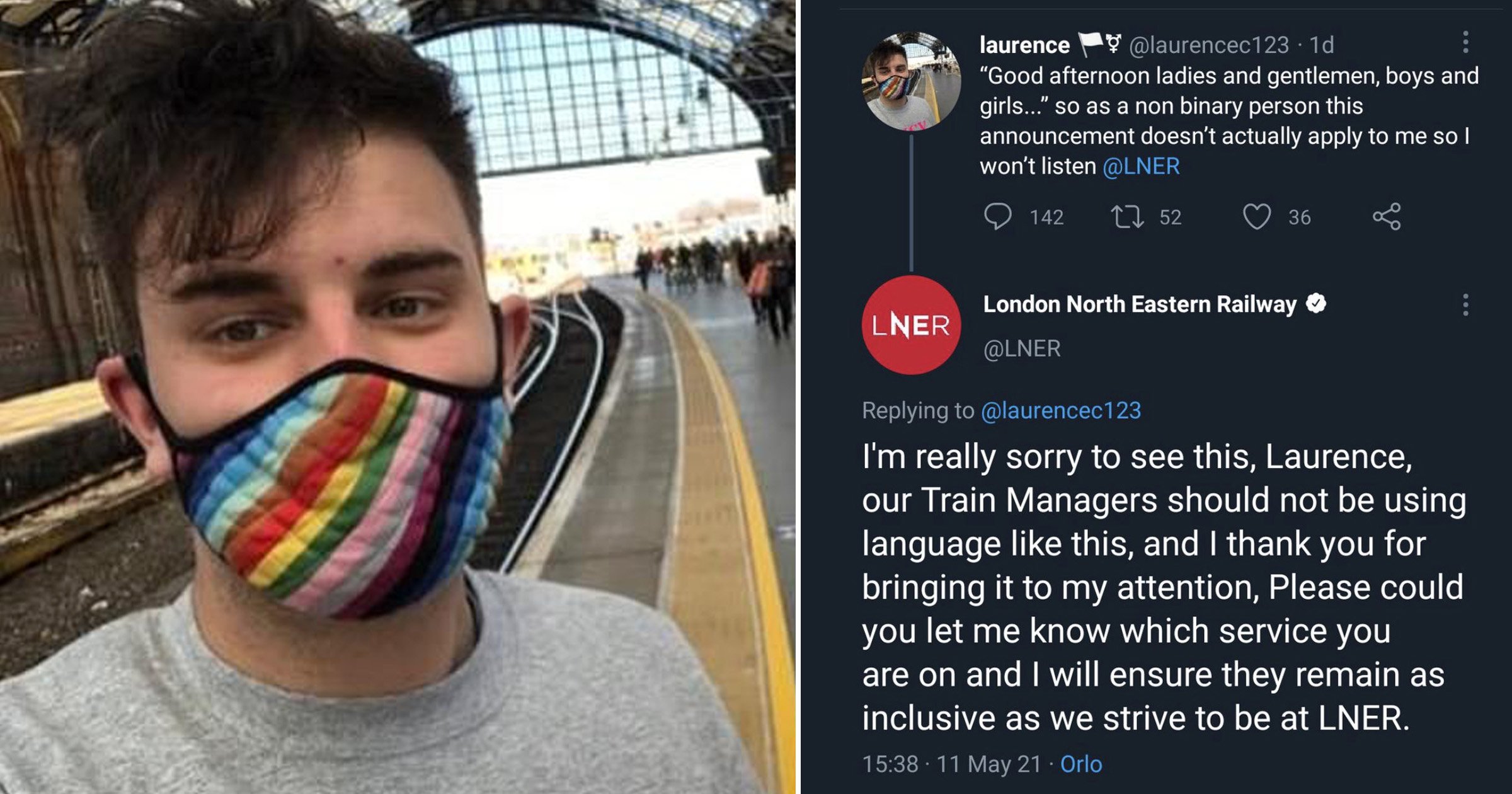 A train operator has sparked a debate after it apologised because the conductor greeted customers by saying ‘good afternoon ladies and gentlemen, boys and girls.’

London North Eastern Railway said in response to a complaint on Twitter that ‘train managers should not be using language like this’ before promising to take action.

The complaint was made by a non-binary passenger who goes by the Twitter name Laurence and uses the pronouns they and them.

Laurence said on their bio they represent the Rail, Maritime and Transport trade union.

Their complaint said: ‘”Good afternoon ladies and gentlemen, boys and girls…” so as a non binary person this announcement doesn’t actually apply to me so I won’t listen @LNER.’

In response, the train company said: ‘I’m really sorry to see this, Laurence, our Train Managers should not be using language like this, and I thank you for bringing it to my attention.

‘Please could you let me know which service you are on and I will ensure they remain as inclusive as we strive to be at LNER.’

While many praised the train company for striving to be inclusive, others hit out at the original complaint, which has since been hidden on Twitter.

Mark Jenkinson, the Tory MP for Workington, said: ‘You’d be forgiven for thinking this Train Manager had unleashed a tirade of abuse.

‘Identify however you like, but can we stop this nonsense?’

Others questioned what the alternative would be if train managers wished to remain welcoming and courteous when greeting passengers.

One said: ‘Well done LNER for sticking up for the Equalities act of 2010, can I just ask what conductors are supposed to say though?

‘Sounds like this one wasn’t following company guidelines, so what SHOULD they have said?’

A colleague who was with Laurence at the time defended the complaint.

Jarley wrote: ‘Both Laurence and I were customers of the railway – being rail staff does not absolve an operator from the duty of care or responsibility to be inclusive.

‘I was sat with Laurence when this tweet was sent. Both of us are non-binary and we were both alarmed and uncomfortable by the lack of inclusion.’

Hitting back at critics LNER confirmed that the member of staff was not going to get ‘in trouble’ and added: ‘We’re not bending over backward to accommodate any one person, we’re doing our best to accommodate every person. There’s the difference.’