The fisherman, named only as Martin, explained how he dragged the inflatable boat a few hundred yards offshore to go fishing in the Severn Estuary when the tide reached him and he got stuck in the strong, fast current. He decided to record the phenomenon as it was a low tide with little wind, reports Wales Online.

In the video, Martin, from Black Rock Lave Net Heritage Fishery in Portskewett, Wales, said: “If I was on foot now, I would be panicking. As it is, it’s a little bit unnerving.

“Here comes the flood tide. There’s no going back. Even though I’m in my boat, my heart is thumping a little bit.

“I wouldn’t be doing this if it wasn’t flat calm, not a breath of wind – it’s unnerving to say the least. But the fish will come in here nice and early.” 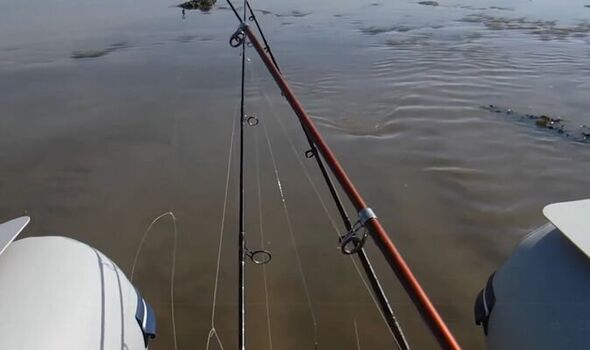 He continues: “I’ve done this a few times before and it’s always the same. Your instinct is to flee…you can see how fast it’s coming in. You’d be in big trouble if you were on foot now – the sand will be turning into quicksand.”

“Boats float, that’s what you’ve got to think, boats float,” he adds at the end of the video.

The Severn Estuary is one of the largest estuaries in Britain and has the second highest tidal range in the world – as much as 15m.

As the National Tidal and Sea Level Facility explains, in a few rivers, sometimes the onset of the flood tide upstream is marked by a distinct, sometimes very vigorous wave – a bore.

The Severn Bore is the most famous one in the UK, reaching heights of up to 2m.

It causes a rapid rise in water level, which continues for about one and a half hours after the bore has passed – the river changing instantly from a calm, slow downstream current downstream, to a strong, fast flowing upstream one.