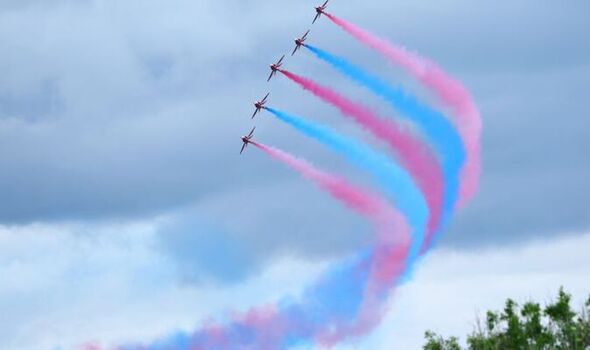 The jets are due to perform a flypast at the show just before midday today. Pilots from the RAF squadron are expected to fly from their base at RAF Scampton in Lincolnshire at 11.58am, heading to Farnborough via Leicestershire, Northamptonshire, Buckinghamshire, Oxfordshire and Hampshire.

The last time the Red Arrows were spotted was as the jets made their way to the Goodwood Festival of Speed on June 26. Before that, the Royal Air Force Aerobatic Team could be seen wowing crowds celebrating the Queen’s Platinum Jubilee.

Queen Elizabeth II watched from the baclony of Buckingham Palace as 72 aircraft flew overhead, including the Red Arrows, Typhoons, Apache helicopters, Spitfires and a Lancaster bomber.

Noted for their distinctive Diamond Nine formation, the Red Arrows pilots fly distinctive Hawk fast-jets. They have been displaying since 1965.

This year is the team’s 58th season. At the start of this year, Red Arrows pilots have flown almost 5,000 displays in 57 countries, according to the RAF.

Farnborough Airshow returned this year after a four-year hiatus caused by the Covid pandemic. It is one of the aerospace industry’s biggest events with 1,500 plus exhibitors from 48 countries, according to the organisers.

Miami-based airline investor 777 Partners ordered 30 MAX at Farnborough in a deal which could rise to 66 planes if options are exercised.

The deal came after a deal for 100 MAX 10 airliners from Delta Air Lines on Monday, seen as a boost for a model the future of which has been clouded by an elusive, year-end deadline for certification in time to avoid costly rule changes.

Lessor ACG ordered 12 737 MAX while Delta Air Lines placed an order for 12 A220 jets from Airbus. Regional planemakers Embraer and ATR have also announced deals during the biennial event.

Farnborough marks the aviation industry’s biggest meeting since the outbreak of COVID-19 pummeled air travel and fractured supply chains. Parts makers are still struggling to get back up to speed.

The head of conglomerate General Electric, Larry Culp, said on Monday: “We have an industry grappling with a downturn and (then) a bounce-back at a challenging time for the economy.”

Tim Clark, president of Emirates, warned for airlines the battle back from the impact of the pandemic will likely take until next year.

He added this year the airline industry had to simply “tough it out”.

EasyJet CEO Johan Lundgren said on a visit to the airshow the low-cost airline had stabilised its flight operations after cutting its summer schedule in June, but melting runways and air traffic control (ATC) restrictions were not helping during a “challenging summer”.

He added easyJet’s daily operations were back to pre-pandemic levels after the cuts, which followed caps on capacity at London Gatwick and Amsterdam’s Schiphol Airport.

Mr Lundgren said at the Farnborough Airshow on Tuesday: “We can’t help if runways are closed down because they’re melting, we have help if air traffic control puts restrictions into the flow system. But the things that actually are within our control, that’s been stabilised.”

Flights at London Luton Airport were temporarily disrupted on Monday after soaring temperatures caused a defect in its runway, prompting airlines including easyJet to divert planes.

Record temperatures in Britain this week ratcheted up pressure on global aviation to shrink airplane emissions and turn a raft of potential solutions – many of which are yet to be proven – into reality.

The boss of planemaker Airbus said the heatwave was a strong reminder of the need for urgency.

Guillaume Faury said: “I consider there is urgency, speed is of the essence in the transition. And in an industry that is hard to abate … we need to be moving fast.”

Platinum Jubilee: How old was Prince Charles at the time of the Queen’s coronation?