Home » Europe » Red Arrows time today: Where to see the Red Arrows fly in the UK

Only the best pilots are chosen to fly the world-famous Royal Air Force planes which are known for putting on spectacular aerobatic displays. Based at RAF Scampton, the Red Arrows have been entertaining the public since 1965 with nearly 5,000 displays in total. Today the Red Arrows will take to the skies – but where can you watch them?

Where can you see the Red Arrows today?

A Red Arrows display will take place at the Wales National Airshow in Swansea at 1.50pm today.

Flying over Swansea Bay, the Red Arrows will be in action showing their best aerobatic moves for onlookers.

Other displays in the show include a Battle of Britain memorial flight and an RAF Chinook will also be present.

As always with airshows, times will be subject to change due to the weather and other factors.

The Red Arrows will set off from Exeter at 1.34pm, before flying over Cullompton, Bratton Fleming, Horton, Pontyates, Tycroes and Pontlliw before taking back in the Swansea air show.

They will then return to Exeter, setting off at approximately 1.51pm heading over the sea but dipping back in land to cross over Triscombe, Taunton and Holmsleigh Green, before landing in Exeter at around 2.34pm. 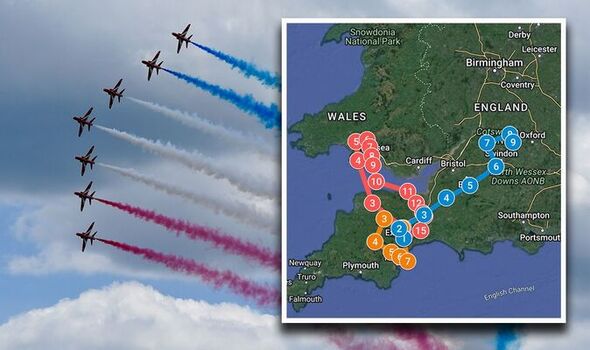 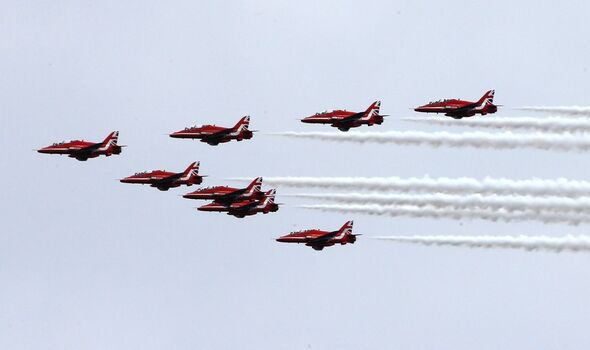 Locals and visitors in Devon can also catch sight of the famous nine in Teignmouth at Teignmouth Airshow.

Display times are expected between 2pm and 6pm according to the organisers and an RAF Lancaster will also be making an appearance.

For the Teignmouth airshow, the Red arrows are due to set off from Exeter at 4.50pm, flying just west of Cullompton, north west of Witheridge, west of Throwleigh and in the vicinity of Chudleigh Knighton before taking part in the display at 5pm.

The return flight will take the Red Arrows back over the sea before they land at Essex at 5.30pm. 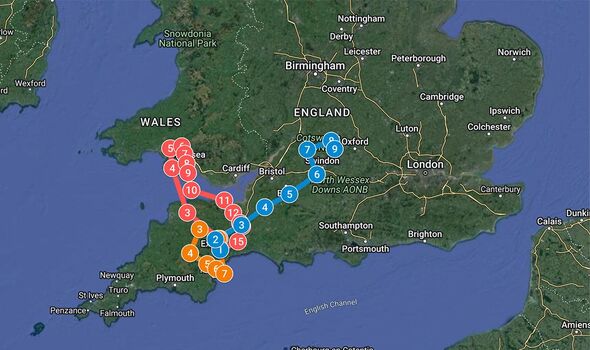 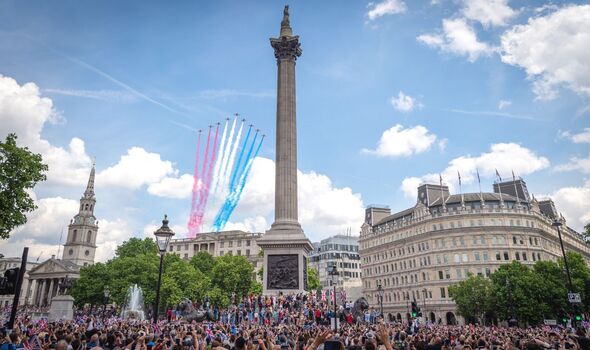 This year is the Red Arrows’ 58th season and its calendar is the busiest it has been since 2018.

RAF pilots have completed an intense training programme before the season started to make sure the team is in top condition for the busy schedule.

A new 20-minute formation celebrating the Queen’s Platinum Jubilee is included this year as the team visits 65 locations across the UK and abroad.

“As a team, the Red Arrows are thrilled to be displaying at a range of events in the UK and overseas – in what has the potential to be the busiest season of shows by the team since before the pandemic.”

All of the pilots have flown Typhoon jets before joining the Red Arrows as part of their service in the Royal Air Force.

DON’T MISS:
Prince Harry lashes out at ‘world consumed by conflict and anger’  [REACTION]
Where is the safest place in the UK during nuclear war? Top 20 areas [INSIGHT]
‘Frankly traumatised’ Ryanair fury as ‘more than 100 people’ STRANDED [ANALYSIS]

The Red Arrows put on their first public display this year during the Jubilee celebrations on June 2 when they flew over Buckingham Palace.

Training for 2022 began last year at RAF Scampton when the pilots were getting up in the sky about three times per day, five days a week.

There are more than 100 support staff involved in helping the team run smoothly and consistently perform at its best throughout the year.

On Sunday, the Red Arrows will appear at Silverstone for the British F1 Grand Prix, and a second appearance at the Wales National Airshow in Swansea will be made.

‘We owe Brussels nothing!’ Britons rage at EU over threat to enforce ‘complete export ban’