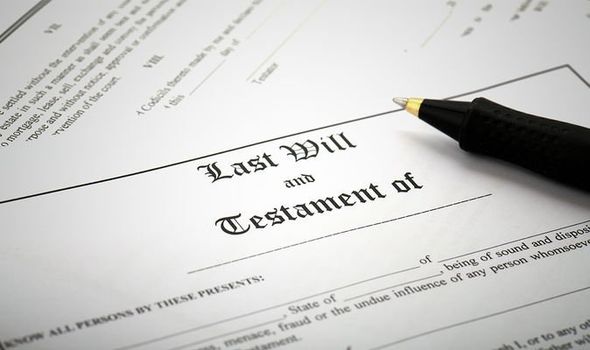 Planning for the future of the family can only make things easier for those left behind after someone’s death. Yet, problems can arise even when everything has been put in place to avoid them… For example, if someone isn’t happy with what’s been decided.

This was the case of a Reddit user who took to the popular internet forum AITA to ask the community what they thought of his messy family situation.

AITA stands for Am I the A** Hole.

He said: “My dad got divorced a year ago from a woman who is not my biological mother, so he just redid his will to write her out.

“I saw a copy of the will today that he left on his table and this is how he has divided it among my family:

The man, as reported by The Mirror, had “spent more time with his dad than anyone” and believed that he had “no interpersonal reason” to give him less.

He went on to explain that he’s “incapable of working full-time” due to a disability “that’s been proven in a trial for me to get disability benefits” and that what is stated on his faterh’s will is not fair.

“The reason he gave me and my younger sister less is because our mother is an MD so she makes a good salary as a doctor, and since my half-siblings’ mother died long ago, he argues that they won’t get the inheritance that we will.

“My brother and his son also have some mental health issues that he uses to justify the inequality, which has kept my brother from working on occasion throughout his life.”

He believes he should have been given more. Is he an as** hole for being upset about not receiving 25 percent of the will?

He wanted people on Reddit to tell him whether to confront his father or not: “It feels weird to do because by nature any addition for me would mean subtraction from whoever of my siblings, who I all love and have good relationships with.

“WIBTA if I do confront him in an attempt to advocate for the 25% I feel I should be given.”

WBTA stands for Would I be the A** Hole.

The user’s dad doesn’t know his son saw the will: “He left it out in the open at the time he invited me over, so maybe I shouldn’t have looked, but it’s not like I unsealed a document.”

Many users got involved in the matter:

One angry user said: “YTA. It’s not your decision to make. Also, I’d be careful here. If your older sister is only getting five per cent because of a financial dispute, I’d argue you could do the same thing to yourself by bringing this up. People don’t take nicely for being asked for more money from their will.”

YTA stands for You’re the A** Hole.

Another user said: “YTA – it is HIS money. Whether he gives you 15 percent or zero percent depends on his choice. It’s somewhat expected but selfish to think that your father owes you money. For what? For being born?”

Replying to a wave of YTAs, the unsatisfied man said: “I can accept that I WIBTA for confronting him. However, maybe I didn’t make the post clear enough by not delving into all of our personal situations, but he’s not trying to create a net equal situation, or, if he truthfully is, he’s not actually executed it.

“Just an example – my younger sister is about to get a doctorate, while I’m disabled and can’t do any full-time work, and we’re getting the same inheritance.

“If he’s trying to balance for situations out of our control, I don’t see how that makes sense, especially when you look at the difference in inheritance between his two young grandchildren”

Following a long and intense online discussion, the thread was deleted by Reddit. A moderator said:”AITA posts should not be about feelings or opinions. AITA posts should be about recent specific conflicts you have had with other people. If you’re receiving this message your post is likely about feelings, opinions, or desires rather than a concrete conflict.”

The question remains – is his concern justified or not?

Hillsborough police chief in court for manslaughter of 95 Liverpool fans

Sophie Wessex title: How one change could mean Sophie rises to the ranks of Kate