The Tory MP for North East Somerset, who is supporting former Foreign Secretary Boris Johnson, said the number of Tory leadership contenders is “already getting too high”. Mr Rees-Mogg told Sky News: “Don’t think about putting down a marker. Don’t think about applying for a post in Cabinet.

“Think about the national and the party interest and the crisis we are in and the need to settle this reasonably soon.

Mr Rees-Mogg insisted the leadership hopeful now “has to” promise to deliver on the 2016 Brexit referendum result. 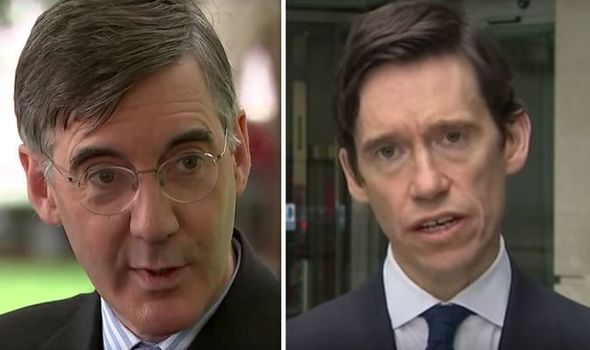 Mr Rees-Mogg insisted the huge political divide across the nation will stop after Brexit is delivered and insisted Britain will “reunite once it is fact rather than theory”.

The Tory leadership contest so far has 12 names in the frame in the race to replace Theresa May as Prime Minister.

The Conservative Party leadership election was triggered when Mrs May announced on May 24 she would resign as leader on June 7.

Boris Johnson is the front-runner in the Tory leadership contest and has said the party could be “fired from running the country” if it does not deliver Brexit.

He said voters in the EU election issued a “crushing rebuke” to the Conservatives and have issued the party with a “final warning”.

Mr Johnson said: “If we go on like this, we will be fired: dismissed from the job of running the country.”

The MP for Uxbridge and South Ruislip has clearly set out his view that the UK must leave the EU by the end of October with or without a deal.

The Tory leadership contest is scheduled to formally begin on June 10 with a winner due to be selected by the end of July.