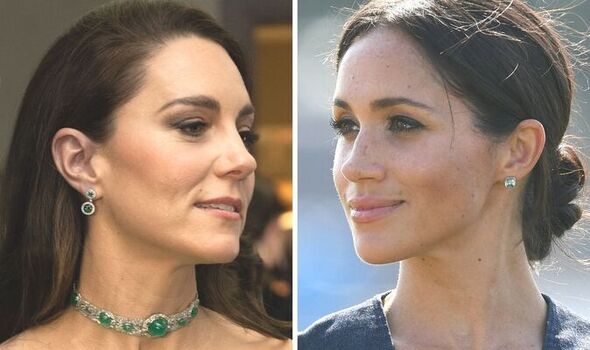 In the first part of their much-anticipated Netflix series, the Duke and Duchess of Sussex gave viewers an insight into Meghan’s first meeting with the Prince and Princess of Wales. Meghan Markle recalled how she first met Prince William and Kate over dinner when she was still dating Prince Harry. In an analysis of the first three episodes to emerge from the controversial docu-series, royal expert Sarah Hewson suggested Meghan’s relationship with the Princess of Wales has been portrayed in a less than “friendly” light from the offset.

Discussing the first part of Netflix’s ‘Harry and Meghan’, Ms Hewson told Times Radio: “We get a lot about the royal relationships which is one of the parts that has been picked up the most.

“Meghan’s relationship with Kate isn’t portrayed in the most friendly light.”

Ms Hewson, royal editor for Talk TV, highlighted how Meghan emphasised the “formality” of royal life as she described her first encounter with the Prince and Princess of Wales.

The Netflix series has been released following speculation over the strained relationship between Meghan and Kate.

In episode two, Meghan recalled: “William and Kate came over and I had met her for the first time, they came for dinner.

“I remember I was in ripped jeans and I was barefoot. I was a hugger, [I have] always been a hugger.

“I didn’t realise that that is really jarring for a lot of Brits.

“I guess I started to understand very quickly that the formality on the outside carried through, on the inside.”

Rumours of a feud between the Duchess of Sussex and Princess of Wales gathered pace around the time of the 2018 royal wedding between Prince Harry and Meghan.

Reports emerged the pair had suffered a falling out in the lead-up to the big day, with unnamed sources claiming Meghan left Kate in tears after a clash over whether the bridesmaids would wear tights or not.

The Duchess of Sussex addressed the supposed argument during her groundbreaking 2021 interview with Oprah Winfrey. She described reports of her row with Kate as a “turning point” in her royal experience.

Meghan explained: “The narrative with Kate, which didn’t happen, was really, really difficult and something that – I think, that’s when everything changed, really.”

The Duchess alleged “the reverse happened,” claiming it was Kate that had upset her but the matter was quickly resolved when the Princess apologised.

Aside from Meghan’s discussion of royal relationships, Prince Harry also made some contentious comments about the pressure on male members of the Royal Family to marry a woman who can “fit the mould” of the institution.

In episode one of the docu-series, Prince Harry said: “I think, for so many people in the family, especially obviously the men, there can be a temptation or an urge to marry someone who would fit in the mould as opposed to somebody who you perhaps are destined to be with.

“The difference between making decisions with your head, or your heart. My mom made most of her decisions, if not all of them, from her heart, and I am my mother’s son.”

Referencing the Prince’s statement, Ms Hewson said: “I don’t know how that will go down with his father the King, or with his brother Prince William.”

Read next:
Boots shoppers can get ‘brilliant’ Soap & Glory gift set for under £5
Harry says royals ‘part of the problem’ amid racism conversation
Sussexes’s series ‘blown up’ as Firm braced for new episodes
Meghan and Harry may feel ‘slightly duped’ after Netflix debut
Harry falsely claims that he ‘had to’ propose to Meghan in the UK