The Conservative MP called for an extension of Article 50 hours after MPs in the Commons voted in favour of ruling out a no deal Brexit scenario on April 12. Mr Clarke claimed he had “never seen a bigger shambles” than the Brexit process in British politics before, but urged MPs not to “overdramatise” the political deadlock. Asked if he was “frightened” by the Brexit impasse, he told BBC Radio 4 Today Programme: “Let’s not overdramatise it. I’ve never seen a bigger shambles.

“Both parties are shattered, the liberals are rather shattered by it as well.

“We don’t know how to adjust because we’re so used to calmer party politics.

“But there’s no violence taking place, personal relations in the House of Commons are okay.

“I see some disfunction at the moment but we do have a tradition of actually really quite statesmen-like and successful political debate. 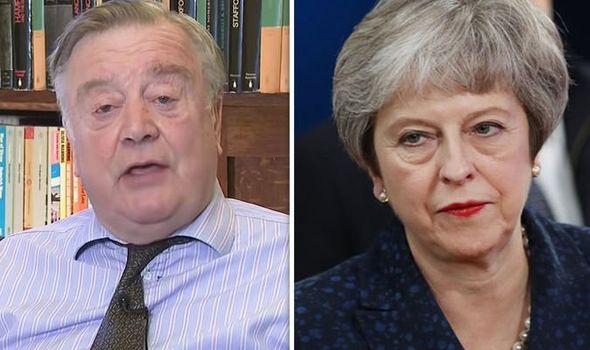 We’ve got to pause, calm down and look for a sensible approach to trading arrangements

“We’ve got to pause, calm down and look for a sensible approach to trading arrangements.

“And politically we probably are doomed to leave the European project.”

Prime Minister Theresa May reached out to Labour leader Jeremy Corbyn to come to a cross-party solution to the Brexit impasse this week.

The Labour leader described the first round of talks with Mrs May as “useful but inconclusive” on Wednesday.

But the meeting sparked fury among some Conservatives, with two ministers quitting Mrs May’s Government and a string of backbenchers directly challenging Mrs May during Prime Minister’s Questions in the House of Commons.

European Research Group deputy chairman Steve Baker told ITV’s Peston the leadership of the Conservative Party was “out of step with members and, I think, the country”.

He said a majority of Tory MPs would not accept a customs union and Mrs May would effectively be making Mr deputy prime minister.

“If we find a majority of Conservative MPs voting against the policy, it’s not us who will be moving on,” he warned.

And Tory MP Andrea Jenkyns told BBC’s Newsnight the Prime Minister should resign for a “fresh approach” to Brexit.