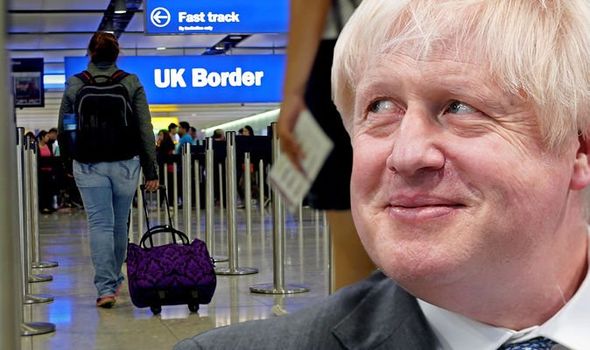 In a report into border controls following Brexit, the NAO said what the UK had been able to do was a “significant achievement”. It also noted there had been no large queues at the border – as Remainers had feared and forecast.

However, it cautioned the Government may not be doing enough to help businesses deal with post-Brexit border controls with the EU.

The report said the Northern Ireland Protocol had made the Irish border “inherently challenging”, and urged the Government to reach a new deal to change the arrangement “quickly”.

Dame Meg Hillier, chair of the House of Commons Public Accounts Committee, said: “Today’s report finds that the Government was able to do enough to avoid the much-feared queues at the border once the UK-EU transition period came to end.”

However, the NAO said that a lot of the early successes of border regulations after the UK’s withdrawal from the EU relied on temporary measures that were “not sustainable”.

The current controls “cannot go on indefinitely”, the report said.

More controls are due to be phased in over the first half of 2022.

Trade with the EU has recovered somewhat, after falling 44 percent in the first quarter of 2021 – the first three months after Brexit.

But, it still remains 13 percent below the preceding three months.

The NAO was not able to disentangle the impact of Brexit from that of the coronavirus pandemic – which saw many economies contract.

Since Brexit, the UK has signed a plethora of free trade agreements with countries outside the EU, and continues to do so.

UK exporters to the EU were still disadvantaged when compared to exporters in the bloc, the report said, as the EU had implemented a full set of border controls while the UK had delayed doing so until July next year.

Despite the delay, the Government’s Border and Protocol Delivery Group still believes there is a high risk that businesses and hauliers will not be ready for more controls come January.

It suggests that supply chain issues across the UK-EU border could worsen in 2022.

The NAO blamed this on the Government lacking a “strategic plan” for businesses as new regulations were introduced.

Just £8.5million of the £20million made available for small and medium-sized enterprises in the first half of 2021 had been applied for by the time the scheme closed.

Meanwhile, only £6.7million had been paid out.

“Leaving the EU has meant businesses have had to grapple with more paperwork and additional cost.

“Government must help businesses adapt to the new rules and put in place border controls that work for all.”

Gareth Davies, the head of the NAO, said: “We recognise the significant achievement of government, departments and third parties in delivering the initial operating capability needed at the border for the end of the transition period.

“However, this was done in part by using interim measures and by delaying the introduction of full import controls.

“Much more work is needed to put in place a model for the border that reduces the risk of non-compliance with international trading rules, does not require any temporary fixes, and is less complicated and burdensome for border users.”