Open Arms with 124 rescued people on board seeks a safe port after being banned by Italian authorities. 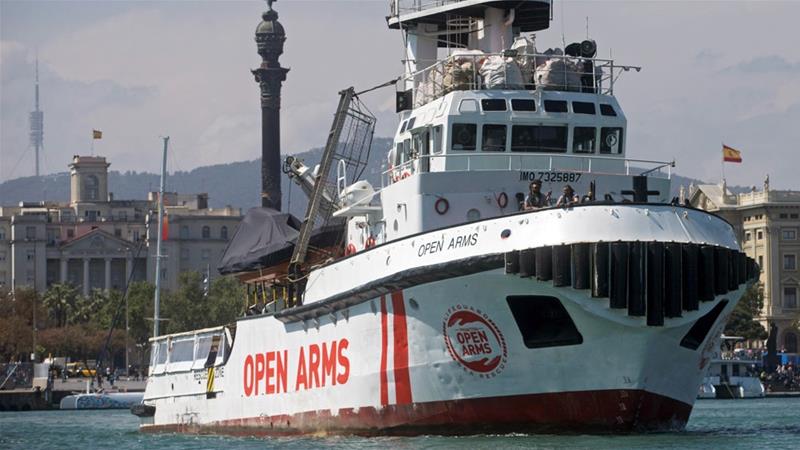 A charity vessel carrying 124 rescued people is seeking a safe harbour after being refused entry into Italy’s territorial waters.

Open Arms, which is operated by the Spanish NGO Proactiva Open Arms and has saved thousands of people in recent years, headed north on Friday but its destination was unclear.

Open Arms had plucked 69 people – including two children – from a boat in trouble overnight on Thursday. They included people bearing “terrible signs of violence” and a nine-months pregnant woman having contractions, the charity said.

On Thursday, Open Arms had already rescued 55 people from a sinking vessel, including two babies.

It now joins the Alan Kurdi, which is run by German NGO Sea-Eye and has 40 rescued migrants on board, in the latest stand-off with Salvini, who is also Italy’s deputy prime minister.

Those on the Alan Kurdi ship, rescued on Wednesday off Libya, hail from West Africa and include a pregnant woman, three young children and a man with gunshot wounds, according to Sea-Eye.

After initially heading to waters off the southern Island of Lampedusa, the Alan Kurdi changed course and set off for Malta.

But the Spanish authorities have forbidden the ship to return to the waters off Libya, saying it would face a fine of between up to 900,000 euros according to the charity.

During its last rotation off Libya in early July, the Alan Kurdi rescued 109 people and disembarked them in Malta.

Salvini has insisted since taking up the interior ministry post in June 2018 that rescued migrants can only land in Italy if an agreement is already in place with other European countries to look after them.

Rescue at Sea: Migrants in the Mediterranean

Irish smuggling ring is linked to 39 deaths in trafficking tragedy