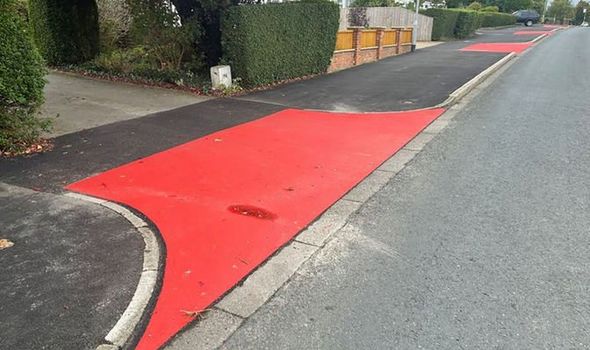 Authorities covered entrances to driveways in the glaring red hue on a road in a leafy suburb of Middlesbrough, Teesside. Residents there, many of whom are retirees, have expressed their outrage at the move.

“I think it’s a bit dangerous for the bike track to be here, I really do. We go out and you can get knocked over very easily.

“I feel sorry for them, the bike lot, but not everybody uses the route. It’s only the really young ones who go up and down, but they don’t abuse it or anything.”

Middlesbrough Council, which Labour lost in 2019, has introduced the red markings as part of plans to improve cycle facilities.

But 76-year-old Tony Butterfield, who lives on the road, told Teesside Live: “It’s awful, why couldn’t they have done it green, even that wouldn’t have been so bad.”

He added: “It’s gone from tarmac city to toy town. The road has lost its character with the grass verges gone. It used to have a character of its own but it’s gone now.

“I think I have seen five cyclists at the most using it, they just stay on the road. It’s not worth it for them, they have to go to the traffic lights and change the side of the road. Cyclists don’t want to do that.

“We do get a lot of, almost semi-professional cyclists in their lycra, they do come down on a Sunday. Perhaps ten together, but they don’t use the lane.”

Tony’s spouse Gerry, 76, said: “It’s a sledgehammer to crack a nut, putting huge slabs of bright red. Cyclists will know there are drives coming out because there are houses there.”

Gerry said she’d prefer the areas repainted black rather than the current red.

Cyclists have to cross the road using a toucan crossing between the northern and southern sides of the suburban lane if they want to stick to the cycle path, because the northern side isn’t wide enough for the two-way cycle lane to just be on that side of the road.

And residents say the cycle path is rarely used as a result.

Kenneth Spragg, another resident, said: “The whole cycleway is a complete waste of time. They still go on the road, they don’t go on the path. The red doesn’t bother me at all.

“The lane is a good idea in theory but the crossing halfway along makes a nonsense of it. It’s a complete waste of time and money but it’s tidied up the grass verges at least.”

Coronavirus: GP appointments to be held by video link -Brits warned stay away from surgery

Woman staged her own abduction to trick ex into paying 'kidnapper' £2,000