Home » Europe » REVEALED: Theresa May promised Brexiteers to quit ‘SEVERAL WEEKS AGO’ and it did NOT work

The Tory Brexiteer told LBC radio he was one of the 170 Brexit-supporting Conservatives to sign a letter to the Prime Minister demanding the UK leaves the EU on April 12 “with or without a deal”. Mr Bridgen claimed Mrs May’s whip office approached him “weeks ago” with a resignation pledge in an attempt to win his vote in favour of the Prime Minister’s Brexit proposal. But Theresa May only officially vowed to quit when she addressed Tory MPs at a 1922 Committee meeting on Thursday, one day before Parliament rejected her withdrawal agreement for the third time.

The pledge seemed to convince prominent Brexiteers like Boris Johnson, Jacob Rees-Mogg and Dominic Raab, but Mr Bridgen said the vain promise failed to convince him not once, but twice.

“And it’s clear to me, and I think it’s clear to most people in the country, whether you’re a Leaver or Remainer that the European Union were never going to offer us a deal that is acceptable.

“To deliver on the mandate we’ve been given, to leave the European Union, we have to leave without a deal. 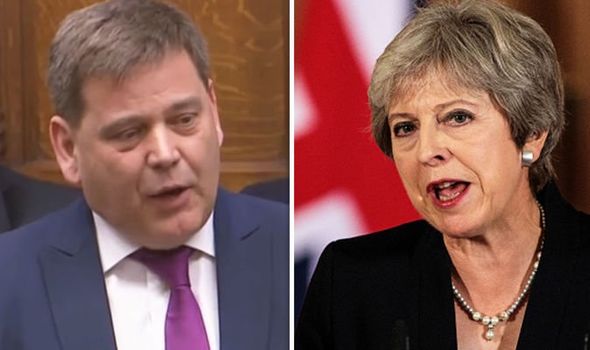 “And also, people have said we can vote for the withdrawal agreement and then we’ll have a strong leader, a new Prime Minister who would get us out.

“Two points on that. Firstly, I was offered that option of ‘vote for the deal and the Prime Minister would go’.

“That was several weeks ago by the whips office and I came back and I said I agree with your analysis the negotiations have been handled so badly the Prime Minister should go but in what way?

“If the deal is that bad that the Prime Minister has to resign over the deal she’s negotiated, why would I want to vote for it?”

MPs rejected Theresa May’s withdrawal agreement for the third time on Friday sparking fears of a snap general election to materialise before the end of this year.

After her plan was defeated by 344 votes to 286, Mrs May told MPs:  “I fear we are reaching the limits of this process in this House.

“And today it has rejected approving the withdrawal agreement alone and continuing a process on the future.

“This Government will continue to press the case for the orderly Brexit that the result of the referendum demands.”

Woman saved after breast implant deflected bullet away from her heart