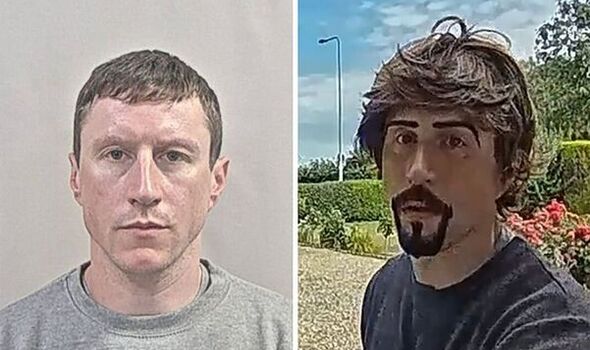 An arsonist wearing a bizarre wig, fake beard and eyebrows set fire to an elderly woman’s bungalow in a dispute over his late grandmother’s will.

Firebug Dean Dowler was named as a beneficiary by his grandmother, along with Patricia Platts, 78, and her partner Roy Bird who had help care for her in later life.

Dowler, 42, was written to on June 12 asking him to leave his grandmother’s home because the other parties wished to sell it.

Two days later Dowler was caught on a Ring doorbell camera before he carried out an attack on Mrs Platts’ bungalow setting garden furniture alight in her back garden. He used a blue rag doused in accelerant to ignite the flames.

The blaze soon spread to the main house and destroyed much of the pensioner’s belongings, leaving her more than £50,000 out of pocket. She had lived at the home for 36 years.

Mitigating at Grimsby Crown Court on Friday, December 2, Michael Forrest said Dowler had approached the doorbell to ensure nobody was home before he started the blaze.

The shocking arson attack was all down to a dispute over Dowler’s late grandmother’s will, prosecutor Jeremy Evans told the court.

Mrs Platts and her partner, Roy Bird, had become friendly with Doreen Howell in the final years of her life and assisted with her care. The couple and Dowler were all named as beneficiaries in her will.

Mr Evans said: “She wanted the will to be divided between the three beneficiaries, but the defendant said to Mrs Platts that his grandmother told him that she wanted him to be the sole beneficiary of the house in Humberston.

“The defendant was written to on June 12 and asked to vacate his grandmother’s bungalow because the other two beneficiaries wanted to sell it.”

In a victim impact statement read out to the court, Mrs Platts wrote: “My world fell apart at the seams. The incident has broken my heart. That was a home that I purchased in the 1980s. I raised my family there and it became a home for my grandchildren who would come and visit.

“I suffer nightmares and flashbacks and had to seek advice from my doctor regarding my mental health. My nerves have been affected. I’ve lost my wedding photos and photos of family occasions that cannot be replaced, and I’ve lost my sanctuary.”

Mum's anger at finding feathers on her KFC chicken

‘Folk will be happy!’ Locals excited as Queen prepares move to quiet retreat