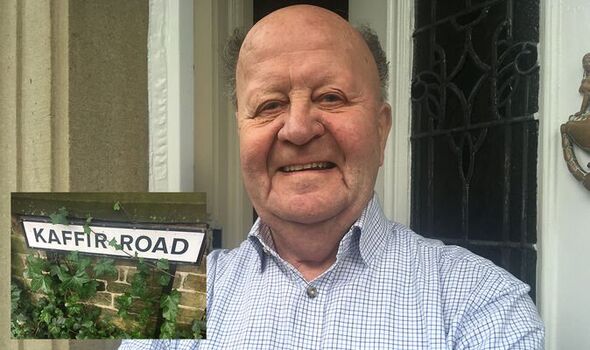 It’s said Kaffir Road in Huddersfield, West Yorkshire, shares the name with a slur against Muslims and some South Africans and is an “historically abusive” term. MP Barry Sheerman, of the Labour and Co-op Party, has led calls for it to be scrapped but residents on the leafy street, in the affluent northwest of Huddersfield, are outraged.

John Ward, who has lived on the street for nearly 50 years, said: “I think the talk of a name change is ridiculous.

“It’s part of the history of the area.”

The retired accountant continued: “I suggest that if any person is offended by being referred to as a Kaffir, then he, in turn, is denouncing the people who bear that name.

“Secondly, the name of the road was probably established before the birth of anyone alive today and is no doubt recorded in the old books and documents of the former authorities.

“Therefore, it is a part of the history of the area and as such should retain its name.”

Kaffir refers to people living in the eastern part of South Africa, as well as the language of the Kaffirs and an inhabitant of Kafiristan in northeast Afghanistan, Yorkshire Live reports.

And 81-year-old Mr Sheerman, who is Labour’s longest continuously serving MP, said: “All over the country people are looking at the history of some of the facts of our history and its links to slavery.

“I’m not the most woke person in the world but Kirklees Council said they would look at any particular aspects and this Kaffir Road does come up time and time again. It’s a very familiar road.

“It has got to the stage where the council has to show some leadership and in this year of the Queen’s Platinum Jubilee I think it’s an appropriate time to have a look at what is a historically abusive term for certain minorities.

“It is time we renamed it as it is offensive to a significant number of people. I know people who visit Huddersfield and say ‘how can you still have that name?’ If it is renamed I would like local residents to be consulted over it.”

A Muslim resident, who lives on the street, agrees with the politician’s views.

He said: “I don’t like the name, it’s offensive and I would like to see it changed.”

David Griffiths, a local historian and leading member of Huddersfield Civic Society who wrote the acclaimed Villas of Edgerton several years ago, said: “The road was laid out in the 1850s by the landowner, Thomas Thornhill.

“His nephews Bryan and Henry Thornhill had both recently served in the Eighth Kaffir War, which ended with the final defeat of the Ciskei Xhosa in February 1853.

“Kaffir is a derogatory term similar to the ‘n word’, and the Kaffir Wars are now known as the Xhosa Wars.

“If the road is to be renamed, two candidates might be Holliday Rd or Ibbotson Rd.

“Read Holliday was a C19 pioneer of the Huddersfield chemical industry, building a business that eventually became ICI – he lived at Lunnclough Hall, Kaffir Rd and also had three more of the houses there built.

“And the late Derek Ibbotson, the four-minute-miler and Olympian athlete, lived there too. But history should not be concealed: an explanatory text could record and explain the former name.”

'I saw people injured in front of me': Dad escaped mosque massacre for new life