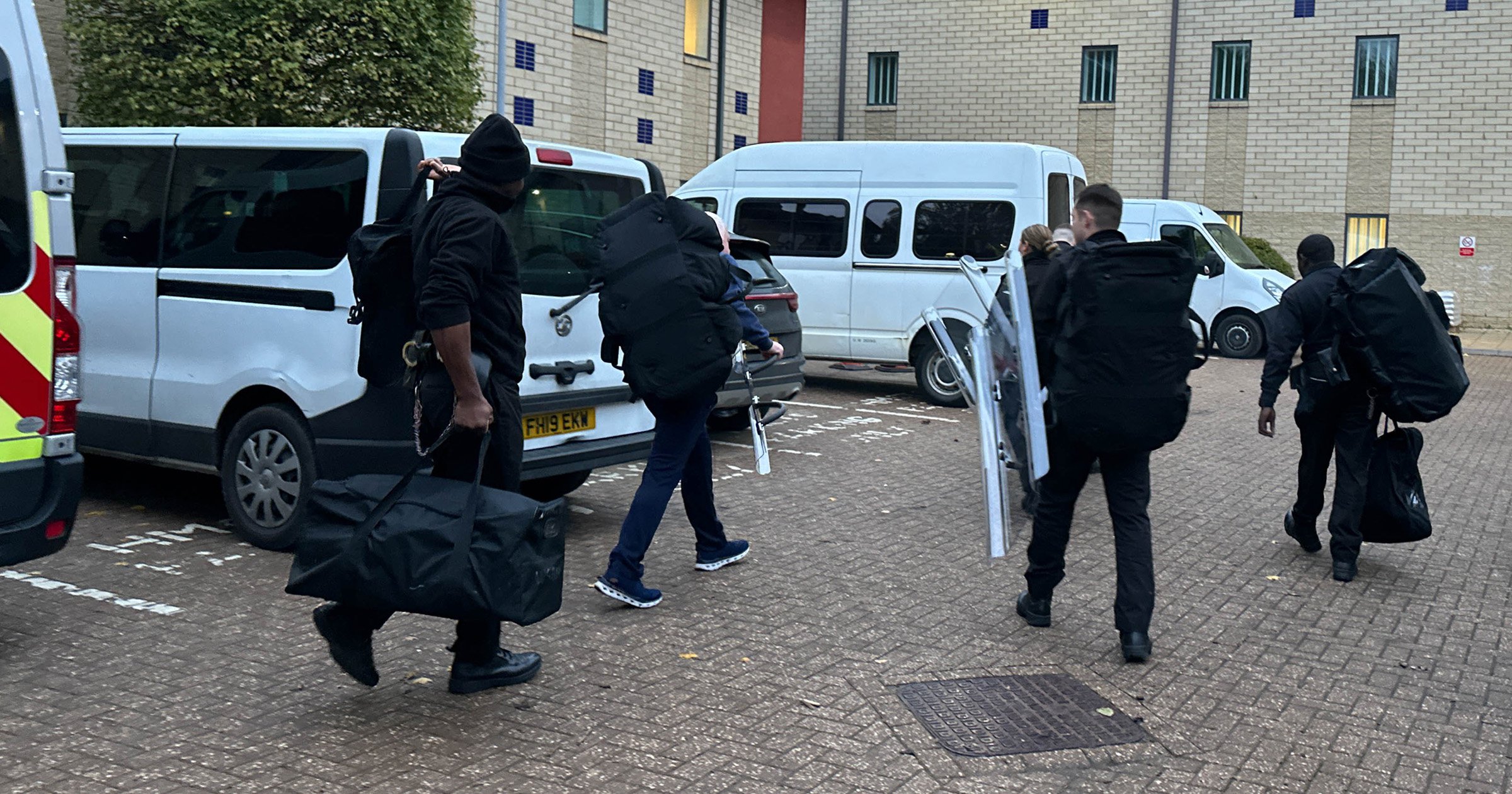 A violent clash involving armed inmates has broken out at an immigration detention facility in London.

Detainees with ‘various weaponry’ have clashed with security during a ‘disturbance’ at the Harmondsworth Immigration Removal Centre.

Riot police are on the scene and the disorder is continuing, though has reportedly been contained to one wing of the site.

It began during a power outage which started in the early hours, the Home Office said.

The facility, which is close to Heathrow Airport, is the largest of its kind in Europe and can hold up to 676 adult males.

According to a March report, the site is ‘used on an occasional basis as a short-term holding facility to accommodate people arriving across the English Channel in small boats’.

It found the centre was in dire need of refurbishment and expressed concern that some med had been held there for more than a year.

Commenting on this morning’s disorder, a Home Office spokesperson said: ‘There has been a power outage at Harmondsworth immigration removal centre, and work is currently under way to resolve this issue.

‘We are aware of a disturbance at the centre and the appropriate authorities have been notified and are on scene.

‘The welfare and safety of staff and individuals detained at Harmondsworth is our key priority.’

The Metropolitan Police service and HM Prison Service are at the scene.

A Home Office spokesperson also told the PA news agency: ‘A group of detainees left their rooms and went out into the courtyard area armed with various weaponry.

‘Territorial Support Police were sent to the scene, and the power is still off.’

They added that none of the detainees had left the premises and that there are no reports of injuries.

It comes amid growing scrutiny on conditions at British immigration facilities and the government’s handling of the rising numbers of people entering the country illegally.

More than 40,000 people have made the treacherous journey across the English Channel in small boats this year, more than four times the total in 2020.

The prisons watchdog called for urgent action this week at the dangerously overcrowded Manston processing facility in Kent after it emerged children were being forced to sleep on the floor.

In March, HM Chief Inspector of Prisons said of Harmondsworth that many detainees had ‘complex needs’ and that the ‘lengthy detention of people with substantial vulnerabilities who had, in some cases, been declared unfit for detention, was also a serious concern’.

A report continued: ‘It was a concern that some detainees had been held for very lengthy periods, often, we were told, as a result of systemic problems with the provision of suitable release accommodation.

‘Eight people had been in detention for over a year and 26 for more than six months.

‘Yet the majority (58%) were simply released after a potentially damaging period of detention.’

Harmondsworth is operated by the private firm Mitie Care and Custody on behalf of the Home Office.