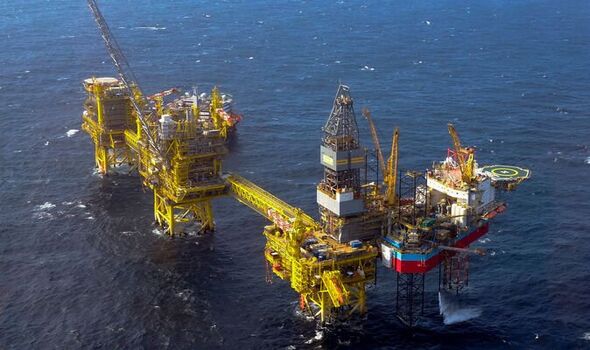 They said the Chancellor urged Business Secretary Kwasi Kwarteng to fast-track licences for six oil and gas fields. They could be given the green light this year, despite the Government’s drive to slash emissions from fossil fuels. A Whitehall source said: “The Business Secretary is pushing for more investment into the North Sea while we transition.

“Kwasi is actively resisting insane calls from Labour and the eco-lobby to turn off UK production.

“Doing so would trash energy security, kill off 200,000 jobs, and we would only end up importing more from foreign countries with dubious records.”

Prime Minister Boris Johnson has ambitions for the UK to be a net-zero carbon emitter by 2050.

But the Treasury is reportedly concerned about the economic impact of switching to greener power too quickly.

The Oil and Gas Authority is reportedly prepared to approve drilling in the six areas, which could begin in the Rosebank field, to the west of Shetland, and at Jackdaw, Marigold, Brodick, Catcher and Tolmount East in the North Sea.

Their reserves are thought to be enough to power the UK for six months, with 62 million tonnes of oil-equivalent fuel in the ground.

The reports have faced fierce criticism from environmentalists and campaigners.

“Now his government is torpedoing climate action by granting permission for more climate wrecking oil and gas to be extracted from the North Sea.”

He said: “We have resources in the North Sea, and we want to encourage investment in that because we’re going to need ­natural gas as part of our ­transition to getting to net zero.”

The Department for Business, Energy and Industrial Strategy said: “There will continue to be demand for oil and gas as we transition to cleaner, more secure forms of energy generated in this country.

“Turning off our domestic source of gas overnight would put energy security, British jobs and industries at risk.”