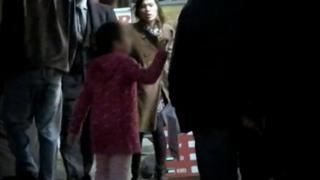 A Romania has upheld the acquittals of 25 men accused of running a major child-trafficking operation.

The men were arrested in 2010 as part of a large joint operation with British police – where children were rescued in London raids.

The men were accused of running a scheme where children were sent across the continent to beg and steal.

The men were previously acquitted by a lower court in February and the appeal court, based in Targu Mures, said prosecutors had failed to present evidence.

They were originally arrested in 2010, along with another man who has since died, in raids with the help of UK police.

They had faced charges for trafficking and criminal exploitation of more than 160 unnamed children, being members of an organised criminal network and money laundering.

The case centred around the village of Tandarei in south-eastern Romania. The victims and suspects were members of the Romanian Roma community.

Bernie Gravett, who led the British investigation, told the BBC that he had personally seen “truckloads” of evidence being sent to Romanian officials in 2010.

“I know the evidence is there, I’ve seen it with my own eyes…” he said.

“We convicted 120 people in the UK of child trafficking, child neglect, child exploitation, money laundering, benefit fraud and a range of other crimes. Yet Romania have not convicted a single individual.”

According to Europol, their Joint Investigation Team worked with London’s Metropolitan police as well as the Romanian National Police force from 2008.

The 2010 operation involved 300 Romanian and British police officers and about 30 raids, AFP reports.

After one raid in Ilford, east London, 28 children aged between three and 17 years old were placed in protective custody.

Police at the time said proceeds from the criminal enterprise were being sent back to fund luxury lifestyles in Tandarei.

Silvia Tabusca, coordinator of the Human Security Programme at the European Centre for Legal Education and Research, was quoted as saying the case represented a “huge failure” of the Romanian justice system.

“We are talking on the one hand about an extremely vulnerable group of people that need to be protected, a very large group of Roma children. On the other hand, this is cross-border organised crime that puts in jeopardy the entire security of Europe,” she said.

The initial acquittal, issued nine years after the men’s initial arrest, caused a number of NGOs to ask international bodies to “remind Romania of its responsibilities” in regards to trafficking.

Mother-of-five, 34, killed in hit-and-run in Wigan