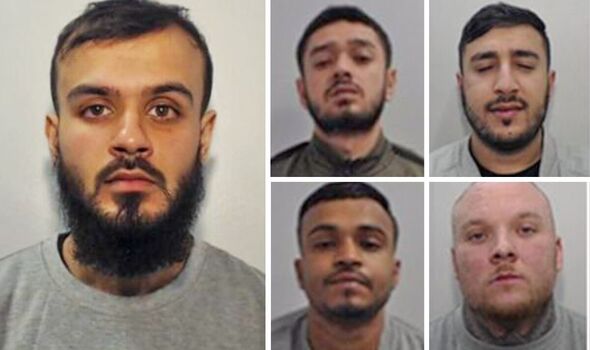 A routine police stop of a speeding car brought down a massive drugs network.

Almost five kilos of MDMA, nearly two kilos of cannabis and a substantial amount of ketamine – with a combined street value of around £220,000 – were seized after officers pulled over the black Audi A3 in Levenshulme, Manchester.

Sadek Shek, Imran Hossain, Jawwad Iqbal-Wahid, Muteeb Tahir and Michael Gill have now been jailed for a total of 31 years.

Iqbal-Wahid, 25, and Hossain, 29, were travelling in the vehicle when patrolling officers saw it speeding. A search was conducted in October 2019 because the car smelt strongly of cannabis.

Snap bags filled with cannabis were uncovered and Hossain was found with a large amount of money and two mobile phones, police added today. Subsequent analysis of the phones uncovered text messages detailing drug dealing in south Manchester and further afield, Greater Manchester Police said, with one of the phones found to be a “drug line” being operated by 25-year-old Shek.

Analysis of those phones led to two other members of the gang being identified, who police said played “key roles in the supply of class A and B drugs”.

Gill, 33 and known as “the warehouseman”, took control of large amounts of drugs on behalf of the operation’s leaders, added Greater Manchester Police. Tahir, 27, was found to be a key customer of Shek, who worked closely with Hossain and Iqbal-Wahid to supply drugs at a street level.

In a statement after the gang was locked up last week, police said: “Shek routinely collected large sums of money from Tahir and Hossain along with other unknown customers. On 17 October, 2019, warrants were executed at numerous properties and six men were arrested and subsequently charged.

“Police recovered over 4.8 kilos of MDMA, nearly two kilos of cannabis and substantial amounts of ketamine and other drugs from one of the properties with a combined street value of £220,000.

“The organised crime group were found to be sourcing large amounts of drugs, which were being distributed to regular customers and would recover large amounts of debts. A property on Westbank Road in Burnage (a suburb in Manchester) was used as a safe house to store the drugs.”

The five men appeared at a Manchester Crown Court sentencing hearing on January 6 after they pleaded guilty to conspiracy to supply cocaine, MDMA, cannabis and ketamine.

The officer in charge of the investigation, Detective Sergeant Mark Graham, from Greater Manchester Police’s Xcalibre Task Force, said: “This criminal network was uncovered, and then dismantled, after two members of the organised crime group were stopped by officers for traveling erratically.

“The recovery of the drugs, cash and mobile phones in the vehicle led to an investigation which established that men were operating as part of a large-scale drug supply conspiracy within the south Manchester area and further afield. The investigation revealed who they were working for, and they were subsequently arrested and charged.

“Their main aim was to make a profit from the supply of illegal class A and class B drugs and were very organised in how they received their payments by meeting at specific locations and using passwords in attempt to stay undetected.”

Queen’s funeral guest list in full: Everyone confirmed so far