Royal commentator Daisy McAndrew discussed who Meghan Markle and Prince Harry’s second daughter Lilibet Diana’s Godparents could be. While speaking on the US chat show Today, she claimed it would be unlikely the pair would choose their British friends or people living in the UK to take on the role. She noted the pair would use their choice as a statement and choose American friends.

She added this would help symbolise them moving from their old life within the Royal Family to their new life in America.

Ms McAndrew said: “There are lots of rumours about who the godparents are going to be.

“I can tell you that it will not be Prince William.

“That is because the royals don’t do siblings as godparents.

DON’T MISS: Cressida Bonas saw future with Harry until ‘he ruined his chances’ 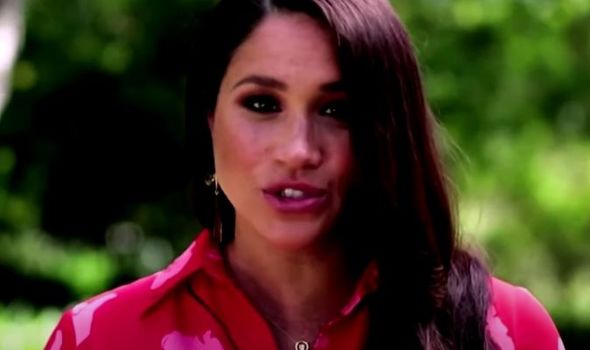 “I think that when you look back at who they chose for Archie, the old nanny, the old father figure, very British people.

“I suspect this time around they will be full of Americans.

“I think that will be yet another departure from their old life to their new life.”

The Royal expert also reflected on the possibility of Prince Harry returning for the Princess Diana unveiling in London.

Ms McAndrew said: “We are expecting Prince Harry to come over for the unveiling that would coincide with Princess Diana’s 60th birthday which is on the 1st of July.

“The latest, I have heard is that the Duke is planning on flying in and flying out on the same day.

“There is no suggestion that he will be bringing baby Lili, Archie or Meghan with him.”

Due to the ongoing feud between Prince Harry and the rest of the Royal Family his trip to the UK was in doubt.

Another reason Harry’s return has had doubt cast upon it is the frosty reception he received from the rest of the Royal Family during Prince Philip’s funeral.

The Duke openly admitted that he was left shocked at the reception he received from his family.

The statue will be installed in the Sunken Garden of Kensington Palace on 1st July 2021.