Royal biographer Robert Lacey said the Duke of Cambridge had his suspicions about Meghan from the early days of her romance with his younger brother. The claim came from a source close to the future King, according to Mr Lacey.

Speaking in ITV documentary Harry and William: What Went Wrong?, the royal historian said: “Someone close to William told me William felt from an early stage that Meghan had an agenda.”

In the updated edition of his Battle of Brothers book, Mr Lacey makes fresh revelations about the rift between William and Harry.

The royal author claims William fumed at Meghan’s “merciless” treatment of staff and called her “that bloody woman” amid bullying allegations from royal staff, which she denies.

It has previously been claimed that the brothers’ rift stretches back to the beginning of Harry’s relationship with Meghan when William urged his younger sibling not to rush things. 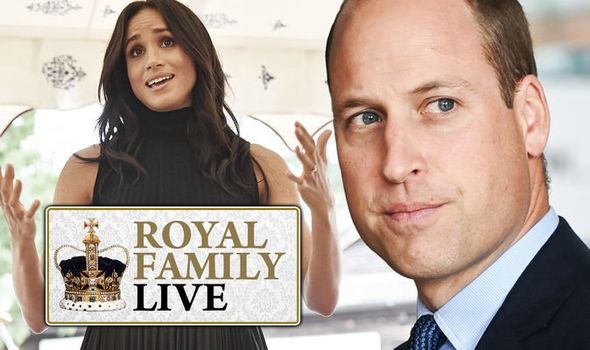 Ms Junor said: “I was hearing very bad stories from early on that Meghan was upsetting people.

“She was not as charming as she seemed.”

The Queen has awarded the George Cross to the NHS and paid tribute to all staff who have worked for the health service throughout the past nine decades.

The monarch handed out the prestigious award on the 73rd anniversary of the NHS Foundation today.

In a heartfelt handwritten message, the 95-year-old expressed her gratitude to NHS services across the UK.

Lady Louise Windsor made a touching tribute to Prince Philip during the Royal Windsor Horse Show.

On Sunday, the 17-year-old once again took the reins in the Royal Windsor Horse Show, the largest outdoor carriage-driving competition in the UK.

However, eagle-eyed Royal watchers were quick to notice Lady Louise made a touching tribute to her grandfather, the late Duke of Edinburgh, by driving his carriage in the competition.