The Duke and Duchess of Sussex marked Valentine’s Day by sharing the happy news they are expecting their second child later this year. Buckingham Palace quickly released a statement to say the Queen and the rest of the royals were pleased with the news. A Buckingham Palace spokesman said: “Her Majesty, Duke of Edinburgh, Prince of Wales and entire family are delighted and wish them well.”

Meghan and Harry are believed to have told the Royal Family before going public – a gesture in marked contrast with their bombshell announcement last year that they were stepping down as senior royals.

With a Megxit review looming on the horizon, one year after they quit the royal frontline, this could be seen as a sign the Sussexes have learned from their mistakes.

The couple quit their roles as senior working royals last March to seek financial independence in the US.

But the Queen was also said to be shocked by their decision as she found out at the same time as the rest of the world. 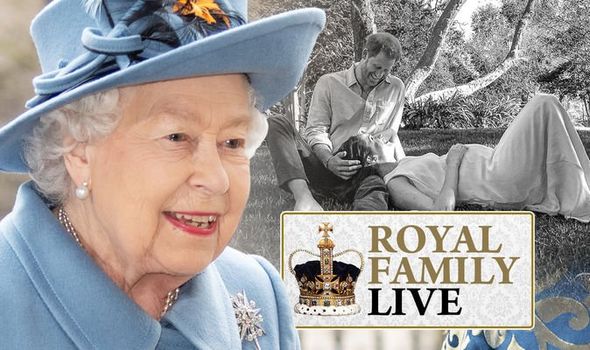 Meghan and Harry released a black and white photo of themselves, sat under a tree in Los Angeles.

Harry was pictured smiling at his wife and resting his hand on Meghan’s head while she lay in his lap cuddling her bump.

A spokesperson for Meghan and Harry said: “We can confirm that Archie is going to be a big brother.

Emily Andrews, Mail on Sunday royal editor, wrote on Twitter: “The Sussexes had apparently told the Royal Family their happy news, but not, it seems, that they would announce it.

“Tonight’s announcement caught officials off guard, with no prepared statements.

“But everyone is ‘delighted’ including the Queen, Prince Philip and Prince of Wales.”

Coronavirus breakthrough: 30 million vaccines set to be available just for UK by SEPTEMBER